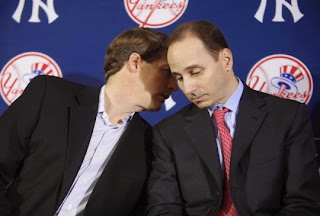 On the payroll goal front, the dragging out of the Alex Rodriguez suspension appeal has been a problem.  The team was hoping for it to be resolved prior to the start of the Winter Meetings.  After a couple of long hearing sessions, even longer breaks in between sessions, and an official report filing and arbitrator review process that isn't set to begin until later this month, that's not going to happen.  The Yankees have said one thing and done another relative to the A-Rod situation, publicly stating that they're planning on having him around next season while engaging nearly every free agent under the sun.  It's clear at this point that they're planning on having his suspension upheld for at least 162 games and his money off the books.  What's not clear is when they're going to know that and how the extended uncertainty could affect their strategy at the Winter Meetings.

On the free agent front, the lack of market development for Robinson Cano is also slowing things down.  A perfect world scenario for the Yankees would have been an early bidding war that included multiple teams offering similar contracts to their initial 7-year/$161 million proposal.  That would have made it much easier to appeal to Cano's status as a homegrown Yankee and play up the "finish your career here and retire as an all-time Yankee great" angle.  Because no other team has come forward and make an offer, Cano and his side have been content to sit and wait for the market to develop.  They have just as little motivation to come down from their high demands as the Yankees do to increase their offer and the 2-sided slow play has added to the confusion surrounding the budget and how much other money the Yankees have to spend.

The international free agent market hasn't been any less difficult, specifically the failure of MLB and NPB to reach an agreement on the new posting terms for Japanese players.  The hope was that the new system would be in place by now and the Yankees would be moving towards winning the posting and negotiating a deal with Masahiro Tanaka.  The delay in finalizing the new system has prevented that from happening and left the Yankees nowhere in their search for 400 more innings.  While an agreement is still expected to be reached, the lack of clear timetable has put the Yankees in a tough spot with respect to their 2014 rotation.  They can't wait around for Tanaka anymore than they can Cano or A-Rod, and they haven't been nearly as active on the free agent pitching front as they have on the position player front.

The early signing of Brian McCann was a great move for the Yankees, but as of right now it's been the only significant move they've made.  If you took a straw poll of the front office, I bet they'd all say they hoped to have more done than they do at the moment and the fact that they don't because of multiple factors outside their control has to be frustrating.  The Winter Meetings are right around the corner and those outside factors all appear as though they're going to continue to hinder the Yankees' progress on these fronts.  How they adapt and adjust their strategy, if they're even planning on adjusting at all, could be the deciding factor in judging the final success of this offseason.
Posted by Unknown at 12:30 PM