The One Where I Say Something Positive About Hal Steinbrenner 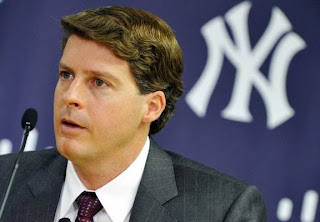 Anybody who reads my stuff with any kind of regularity know I'm not a Hal Steinbrenner fan.  I don't think he's a smart baseball guy, I don't think he's as smart of a businessman as he fancies himself, and I don't appreciate his lame attempts to try to convince the Yankee fanbase that his #1 goal is still to field a championship-caliber team when none of the decisions being made are in line with that declaration.  I find most of what he says to be incredibly insulting towards me as a relatively intelligent Yankee fan, and to me he's more like that meddling boss at your office who thinks he's an authority on everything just because he's in the position he's in.

All that said, I have to put my hatred aside and give credit where credit is due.  I have to give some props to Hal for what he and the front office team have already done this offseason.  It hasn't been much, but it's been enough to show that maybe, just maybe, there's more than the bottom line and luxury tax avoidance being considered here.


Case in point, the aggressive approach the Yankees are reportedly taking at the GM meetings this week.  These meetings are usually nothing more than a tepid warm-up act for the Winter Meetings in December, mostly just teams doing their due diligence and lining things up to make the big moves next month.  According to a story by Jon Heyman last Friday, that's not the approach the Yankees are taking this week.  Heyman's piece has the Yankees looking like the hot stove pace setters again, setting up meetings with a bunch of the big name free agent targets already on their wish list.  And at the forefront of this big push?  Hal himself.  Heyman quoted one source who said "Hal is very involved, and he wants to win," and got a similar statement on the Yankees' aggressiveness from Scott Boras, agent for more than 1 of the players who've reportedly drawn the interest of the Yanks.

As for that list of targeted players, it's grown from a few of the predictable names to an almost all-encompassing list of free agents that would be viable options for the Yankees regardless of what their spending limitations are this offseason.  There's the big money guys like Tanaka, McCann, Beltran, Choo, and Ellsbury, the mid-tier guys like Drew, Jimenez, Garza, and Haren, and a new batch of lower-dollar guys like Bronson Arroyo, Scott Feldman, and Eric Chavez.

The Yankees also have feelers out on multiple international pitching free agents, not just Tanaka.  It's almost as if they're casting their net as wide as possible to account for any of the conceivable A-Rod appeal outcomes.  If his suspension is upheld and his salary is completely off the books next year, they can go harder after those top tier guys.  If the suspension is reduced and only some of this salary comes off, they've got those mid-tier options.  And if the suspension is completely overturned and A-Rod and his salary are 100% on the books next year, there are cheaper guys the Yankees can go after to try to stay under the luxury tax threshold.  For once, it appears as though the "it's a goal not a mandate" statements and actions are in agreement, and if they are then Hal should be commended for that.

If nothing else, Hal deserves some credit for getting more involved in the actual process of the offseason instead of just issuing statements about it.  Too often last year there was the sense that Hal only cared about saying the right thing to the media while doing the exact opposite of that behind closed doors.  At the very least, this offseason he appears to be more tied into what's going on and more committed to making moves that actually help the on-field product.

I still think he needs to smarten up a bit when it comes to going after older "name" players and I still would like to see Cash and the baseball ops people have more of a say in personnel decisions, but it's hard for me to criticize anything Hal has done or said so far this offseason.  Maybe the on-field results and lower attendance and TV ratings this year were a wake-up call to him.  Maybe he does realize now that if you're going to say the payroll goal is a goal and not a mandate, you need to act like it.  Maybe he sees the value in spending money to make money knowing that his franchise isn't hurting for cash and won't be anytime soon.  Whatever's really going on, it's a much better look for Hal this offseason than it was this time last year, and even though there aren't any results to evaluate yet, I have to applaud him for this apparent change in philosophy.
Posted by Unknown at 1:00 PM