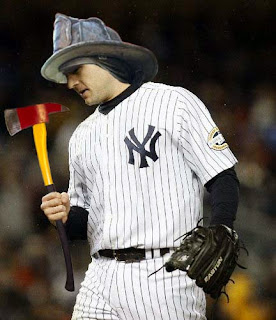 As has been documented here time and time again, Dave Robertson has consistently been an above-average relief pitcher since 2009-2010 and has risen to the elite level of relief pitchers in all of baseball in the last 3 seasons.  Since entering MLB in 2008, D-Rob ranks 6th among all relief pitchers in fWAR with 7.6, behind only established closers Mo, Jonathan Papelbon, Joe Nathan, and Craig Kimbrel, and fellow setup specialist Matt Thornton.  He moves up to 3rd since 2011 (5.9), when he started to improve his command and GB rate, behind only Kimbrel and Greg Holland of the Royals.

It hasn't been because of luck either.  Statistical splits show that Robertson has been at his best in situations with runners on base and even better with runners in scoring position.  This is the same guy who had a streak of 25 straight outs recorded with the bases loaded.  If those types of results don't speak positively to his capability of handling a closing role, a role that's really no situationally different than being the 8th inning setup man, I don't know what does.

If the only thing Cash and the other decision makers in the front office can point to to suggest that D-Rob isn't capable of handling the closer role is his record in save situations, that's pretty weak.  Yes he has 8 career saves compared to 10 career blown saves, but that's spread over a 5-year sample size and can't be looked at as anything definitive.  If you want to judge him on how he's done in save situations, consider the 1.75 ERA and 169 strikeouts he has in 123.1 career save situation innings.  That tells a much better, and more accurate, story than a few bad outings and blown saves in extremely sparing closing appearances.

Mo spent a year setting up John Wetteland before getting the job.  Papelbon and Kimbrel were both worked in as setup guys the year before they moved up to the 9th inning, same with Nathan, Brian Wilson, Rafael Soriano, Francisco Rodriguez, Huston Street, Fernando Rodney, and pretty much every other closer who's come along in the last 10 years.  Nobody just gets the closer role handed to them, they have to prove they're capable of handling a setup role first.  Robertson has been proving that every season since 2010, way longer than any of those other guys had to, and the results he's had should be more than enough to at least give Cash and the Yankee front office confidence that he's "capable" of handling the job.

If D-Rob were pitching on any other team in baseball, he'd probably be their closer right now and would have been for the last few seasons.  He doesn't have a lot of true closing experience because he's had Mo in front of him and that's certainly not his fault and not something he should be graded down on as a result.  He's followed the same path to the doorstep of a closing job that every other big name closer in baseball right now has and he's excelled on that path.  The only real test he has left is to actually get the closing job and work in that role on a regular basis and the only way that test happens is if the Yankees open their eyes and their minds and commit to him.

It's real simple.  If the Yankees still don't think Robertson is up to the task of closing after 6 seasons as one of the best relief pitchers in baseball and 6 seasons studying under the best closer of all time then that's on them, not D-Rob.  He's not Mo and he's never going to be Mo, but there's really no legitimate reason to think he isn't capable of being the closer next year and being a very good one.
Posted by Unknown at 1:07 PM