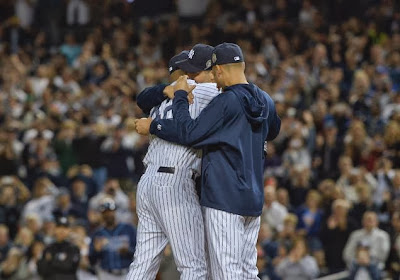 
There's not much that needs to be said about the emotion that was tied to Mo's last year.  The ovations he received at every stadium and gifts he received from every opposing team showed not only how much Mo meant to the Yankees but to the game of baseball.  His professional reputation has become something of legend around the game and everybody was smart enough to realize there's never going to be another one like him.  In the same way he always has, Mo handled his last year with all the grace, dignity, and mutual respect for the fans and other players we've come to expect, exemplified by him holding pregame meet and greets with team employees at every park the Yankees visited.  And if that wasn't enough, he proved he could still get it done on the mound at age 43 with a 2.11 ERA, 3.05 FIP, and 44 saves.

Andy, also ever the consummate professional, held off on announcing his retirement so as not to take away from Mo's spotlight, but still managed to get in a memorable finish for himself by pitching some of his best ball of the year down the stretch.  Andy was the team's best starting pitcher in the month of September, and he proved he could still do the job with a 3.2-fWAR season, second best on the Yankee pitching staff.  Nothing flashy, just the same cutter, the same array of offspeed stuff, and the same glare from under his cap brim that we've always known.  Andy tossing a complete game for the win in his final career start in Houston was a perfect way to send off the best Yankee pitcher since Guidry.

For all the good moments and memories that Mo and Andy's last years brought, The Captain's likely second-to-last one brought mostly negativity.  Jeter was hardly on the field at all this season, and when he was it was obvious to anybody watching that he was a shell of himself.  Even the look on his face was different this year.  Derek looked old, looked tired, looked worn down from all the years he's put in as the face of the franchise and one of the faces of baseball.  It was difficult to watch Jeter struggle so mightily to do even the simplest baseball tasks.

It might be in his best interests to hang 'em up with Mo and Andy, but Jeter's pride and a $9.5 million option will almost assuredly override that.  Jeter's struggles this year are a perfect representation of the manner in which the Yankees lost their way as an organization.  They clung too long to the days of glory past and were unwilling to see the need to change and move on until it was too late.

Despite the sobering prospect of a gimpy Jeter limping to the finish line next year, he and Andy and Mo are always going to be remembered for their highs more than their lows.  The highest of those highs comes from that '96-'01 era and it was fun to get to reflect on those moments this season while watching some of our favorite Yankees play their final seasons.  The image of Mo, Andy, and Jeter standing together on the mound on Mariano Rivera Day will be one that lives on in Yankee history for years to come, and it was a very appropriate moment for them to share.  So much of what was great about those dynasty years was great because of the 3 of them, and when fans look back on those days 10, 20, 30, 40 years from now, it's those 3 who will be first and most fondly remembered.  For now though, the era is over and the Yankees need to move on.
Posted by Unknown at 12:43 PM