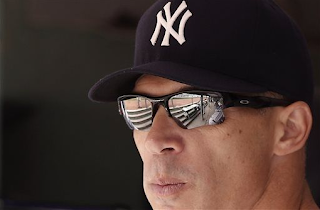 The Yankees enter play tonight 2.5 games behind the Tampa Bay Rays for the second Wild Card spot.  They're 3 games back in the loss column, so even though they wouldn't mathematically be eliminated with a series-sweeping loss at the hands of the Red Sox tonight, to be 4 down in the loss column with 12 to play would be a Herculean task for this team to undertake.  The Yankees need a win tonight to keep their postseason hopes alive and they needed something good to happen to get some positive vibes going.  Guys are hurt left and right, pitchers are tired, the offense is sputtering, so how about we get a good old fashioned live blog going tonight to start the vibing?  Here's the Yankee starting lineup:

And taking the ball for this critically important game is Ivan Nova.  How will his triceps hold up?  Will he be able to put Boston's hitters away and give Joe some length?  We'll see.  ESPN will be showing the pregame ceremony for Mo prior to first pitch, so check back around that time for the start of the live blog.

6:58 PM- Nothing snarky I can say about the Boston Pops playing "Enter Sandman" for Mo.  That's actaully pretty cool.

7:06 PM- The old pieces of Fenway Park are cool gifts, but it is a weird feeling watching the entire Red Sox team stand on the field and applaud Mo for 10 minutes.  Something will never look right about that.

7:15 PM- Nice first at-bat by Granderson against Clay Buchholz.  Fouled off some fastballs, forced Buchholz to throw all his pitches, and drew a walk when Buchholz missed with some offspeed pitches.

7:16 PM- And heads up baserunning by C-Grand on the throwaway by Buchholz.  He was thinking third base all the way.

7:25 PM- A-Rod drove the run in to give the Yanks the lead, and they did make Buchholz throw 20+ pitches.  I'm going to chalk that top of the 1st up as a positive.  Here's hoping Ivan's arm is feeling good and his command is there.

7:32 PM- Well that didn't take long to go away.  Big Sloppi beats the shift easily and the game is tied.  Is it me or do the Yankees suck at shifting the infield?  Seems like every time they do they give up a hit.  That's not how it's supposed to work.

7:34 PM- Great stat on the Red Sox lineup that really drives home how patient they are.  To be over 1,000 pitches ahead of the team in second place behind you in most pitches seen this season is incredible.  Think of all you could do with 1,000 more pitches.

7:37 PM- If you didn't see that Napoli home run coming after Nova airmailed the previous curveball then you don't know Ivan Nova.  This is where him becoming a 2-pitch pitcher comes back to hurt him.  Guys can just sit on his fastball in fastball counts and tee off on it.

7:47  PM- It's depressing watching Ichiro at-bats these days.  The ball never makes a good sound coming off his bat anymore.

7:52 PM- Hershiser being really tough on Nova for his lack of command and how much he's missing, and he's 100% right.  You can't be an effective Major League starter and throw a 1-2 pitch that misses by feet.

7:58 PM- Bad leadoff walk of the 9-hitter after Buchholz had Stewart 0-2.  Yanks need to turn that gift into something.

8:01 PM- Nice try turning up all the stadium mics when A-Rod came up this time to make it sound like he was getting booed louder than he actually was, ESPN.  We all heard how quiet it was during his first AB.

8:04 PM- Terrible fucking at-bat by Robbie with 2 on and 1 out.  You can't be swinging first pitch there and you can't just take a weak hack and roll a groundball over.  You have to know you have old man A-Rod and his bad legs running at first and make a real effort at putting a quality AB together.

8:07 PM- Really dangerous inning in the game here.  Leadoff man on against Nova and the heart of the order coming up.  Cannot afford to go down 4-5 runs here with another big inning...

8:10 PM- And THAT'S why they traded for Brendan Ryan!  Holy shit what a great snag and even better turn to start the double play on Ortiz's hotshot grounder.  Dude is stupid good with the glove.

8:11 PM- Nova doesn't waste the good defense and gets out of the inning.  If he can ever settle in and get his fastball down in the zone, he can go deep in this game.

8:14 PM- Kruk wanted sooooo badly to say A-Rod's name there when talking about "that guy" who's not as classy as Mo and Jeter.  Can't believe he held up.

8:17 PM- Second straight leadoff walk wasted by a first-pitch swinging GIDP.  The Yankees are going out of their way to let Buchholz and his non-existent fastball command off the hook.

8:28 PM- Bad luck there on a sure double play ball.  Don't think I've ever seen the guy turning it hit the oncoming baserunner with the throw.  It was Napoli, so hopefully that throw broke something in his hand.  If I never had to see him face Yankee pitching again I still wouldn't feel confident he wasn't going to go yard.

8:35 PM- Absolute goatfuck there.  Shitty pitch, shitty throw to second, shitty catch, and a shitty run to give up with 2 outs.

8:41 PM- Third straight inning drawing a leadoff walk off Buchholz.  For the love of everything good and decent, please turn it into something this inning.

8:55 PM- Ivan has officially regressed back to "total question mark" status for next season.  Simply cannot keep his mechanics and command together for more than a month or 2 at a time.

9:07 PM- Really nice job by Adam Warren coming in and cleaning up Nova's mess.  2 big strikeouts of Napoli and Saltalamacchia and he worked from ahead of all 3 batters.  Still a 5-1 Boston lead heading to the 6th.

9:10 PM- Total no-show from Cano at the plate tonight.  I haven't seen him take 1 meaningful swing at 1 good pitch.  Just giving up at-bats left and right to a pitcher who doesn't deserve it.  Puzzling to say the least.

9:14 PM- Yanks go down 1-2-3 in the 6th and suddenly Buchholz is having a good game.  Crazy to think he's only given up 2 hits with as much as he's been missing with his fastball tonight.

9:23 PM- A rare Ichiro defensive botch set Warren up for trouble in the bottom half and Daniel Nava's 4th hit of the night made it 6-1 Boston.  This game, and this series, has been a clinic in how much better the Red Sox are than the Yankees in every way.  They pitch better, they hit better, they field better, and they run their organization better.  It pains me greatly to say that, but it's the truth and the proof is right there on the TV screen.

9:32 PM- And right on cue, Joba comes in and looks great getting 2 outs to end the inning in a 6-run game.  Dude's a low-leverage hero.

9:41 PM- Gotta love Hershisher justifying the Red Sox fanbase's fairweather nature.  Nothing says dedication like quitting on your team during the hard times and only coming back when they're the best team in the league again.

10:17 PM- If you're still a Dellin Betances supporter, you got to see him pitch a perfect 8th.  And if you're a fan of good defense, you had a fun night watching Brendan Ryan.  Damn!  He's good.
Posted by Unknown at 6:07 PM