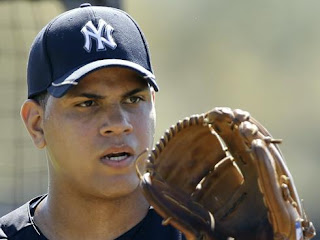 
Since the conversion, Betances has been an entirely different pitcher and a much better one at that.  In 48.2 innings as a reliever, Betances has allowed just 8 ER (1.48 ERA) while racking up 63 K to 21 BB.  He hasn't given up a run in his last 17 appearances dating back to June 16th, and hasn't given up a home run since May 25th.  As expected, the shorter outings and limited exposure to opposing lineups have helped curb Betances' command issues and allowed his natural stuff to play up.  With Mark Montgomery recovered from his shoulder problems and back closing games for SWB, he and Betances have formed a nice little 1-2 late-game punch for the RailRiders.

The issue now becomes what to do with Betances.  He had already reached make-or-break prospect status entering this season, which is why the Yankees were so quick to pull the plug on him as a starter when he continued to struggle in that role.  At 25 years old and turning 26 before the start of next season, Betances is out of MiL options and either has to be added to the roster next year or cut loose.  As a former top prospect, it would be a bad look for the Yankees to lose Betances after only getting 2.2 innings out of him at the Major League level.  Now that he appears to have figured things out, it would be wise to find a way to work him into the bullpen mix now as an audition for 2014.

The Yankees don't have an immediate need for bullpen help.  Mo and D-Rob have the late innings on lockdown, Preston Claiborne and Shawn Kelley have done solid work handling the middle innings, and Boone Logan, strange situational splits aside, is still useful as the primary lefty.  But Mo is retiring after the season, Logan is likely to leave via free agency, and current mop-up man Joba Chamberlain is going to do the same.  There are holes in the 2014 bullpen that need filling, and Betances' still plus stuff and relative youth should make him a leading candidate to do so.

I don't know how they can do it without an injury or an outright release of Joba, but it would be nice to see the Yankees get Betances up earlier than the September 1st roster expansion and get him some meaningful work in the final 7 weeks of the season.  Bare minimum, they need to know if it's worth even considering him for a spot next year.
Posted by Unknown at 11:00 AM