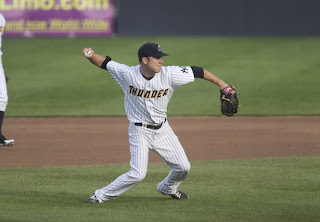 
The Yankees want to move Phil Hughes and Joba Chamberlain.  There's no doubt about that.  They've been extraordinarily light on offers lately thanks to poor production from both players.  Joba has been reduced to meaningless garbage time innings since the ASB and he's only pitched twice since the start of the second half.  Hughes is up to a 4.58/.464 ERA/FIP split on the season after giving up 8 R (5 earned) on 13 H and 5 BB in just 9.2 IP over his last 2 starts and having both those starts stand out for the quick hook Joe had with him.  His trade value couldn't be lower right now and chances are the Yankees are going to have to follow through on their backup plan to get any value out of Hughes after the season.

That is, unless they find a team willing to offer something good for him (or Joba) and unless the front office is willing to come down on its asking price.  There's little reason for them to do so in their present situation, but it's becoming increasingly clear that the organization is done with Hughes and Joba as meaningful parts of the team.  The once touted prospects have become the biggest non-A-Rod boo targets on the team and based on all the other head-scratching decisions they've made this year, it wouldn't be the most shocking thing in the world if ownership decided to just take what they could get in return and get rid of these guys for the sake of getting rid of them.

If it's decided that's the route to take, Phelps gives Cash the flexibility to pursue moving whichever player offers the most realistic trade possibility.  Like last year, Phelps has worked both as a starter and a reliever and has had his ups and downs in both roles.  He'd essentially be replacing the 5th starter and lowest-leverage reliever currently on the roster, so concern about his high ERA and BB splits this season probably wouldn't be a huge deal.  If Cash can find a decent deal for Hughes and he gets the go ahead, Phelps can step back into his spot in the rotation.  If Joba gets the heave-ho, Phelps fills in as the low-leverage swingman.  Depending on how Phelps pitches when he comes back, the combination of his production and the return from the trade could make it a net gain for the Yanks.

This is admittedly a long shot of a scenario, and something I don't think the Yankees would actually consider. With Phelps having thrown 61 pitches last Tuesday and presumably more tonight, they should at least be prepared to utilize Phelps however and wherever he's most needed when he is ready to come back.  If he's up around an 80-90 pitch count, that's enough to serve as a back end starter or be easily transitioned back to a bullpen role.  However a spot opens up, if one even opens up at all, the Yankees will be well prepared to fill it with Phelps.
Posted by Unknown at 12:43 PM