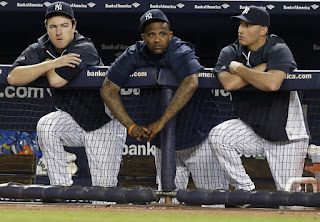 CC Sabathia- Even with a diminished fastball, CC's still getting it done because he's become such a good pitcher.  He's walked 2 batters or fewer in 11 of his 13 starts, 1 or fewer in 8.  He's also struck out 8+ batters in 3 of his last 5.

Hiroki Kuroda- The rotation's greatest model of consistency, Hirok didn't allow more than 3 ER in a start in his first 9 of the year, and he's still tied for the most starts in MLB this season with 7+ IP and 0 ER allowed (4).

Phil Hughes- Good Phil has been pretty damn good this year.  Hughes has 5 starts of 7+ IP/2 < ER allowed this season.  He's also yet to walk more than 2 batters in any of his 12 starts, and his 3.65 K/BB rate is a new career high.

Ivan Nova- Didn't have one of the starts that didn't make it out of the 1st inning.

Well, maybe Nova hasn't been that great, but whatever.  Baby steps.  Phelps keeps pitching the way he has been and we won't have to worry about trying to find a golden nugget in Nova's performances.

Job well done, boys.  On behalf of all Yankee fans and whatever teammates haven't said it to you yet, thanks for holding up your end of the bargain this year and some of the lineup's end too.
Posted by Unknown at 2:00 PM