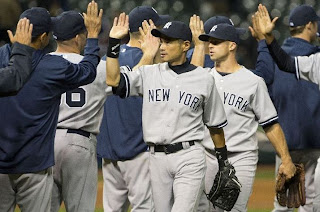 
I'd been doing my best to stay calm and not overreact to the early struggles because, as a lot of other writers on this site and many others across the blogosphere had touched on, what else did I really expect?  The team that opened the season was old and bad on paper and they played old and bad on the field.  But truthfully, I was ready to blow up and I was ready to use what I expected to be a massacre at the hands of Justin Verlander and the Tigers on Sunday afternoon as the spark.  I honestly didn't think the Yankees were going to win that game and I didn't think they were going to follow it up with two games like these last two.  32 runs in three games is something I wouldn't have expected from a fully healthy regular lineup this season let alone the lineup Joe's been using, but it happened.

Here are some other fun tidbits from the last three days, just because I'm in a good mood:

And the best part is there's still room for improvement.  CC and Hiroki, although better in their last starts, aren't anywhere near top form; Nova and Phil still need to put it together in the back end of the rotation; the middle relief is woefully thin and painfully ineffective right now; and the lineup could use some more consistency from everybody in the bottom of the batting order not named "Cervelli."  But the old replacements are mashing, Andy is still pitching like mid-2000s Andy, and Robbie has gone from 0 to "just walk the guy" quicker than it takes most us to write up a grocery list.

Thinking back to the point I made to open this post about small sample sizes, there is the possibility that short burst of excellence ends tonight.  The winning streak could stop at three.  It certainly wouldn't be surprising given the way this season started, and a loss tonight would be much more expected than another blowout win.  For my money, that's all the more reason to celebrate what the team has done these last three games.  It was one of the most unexpected outcomes I think any of us could have thought up just a few days ago, and it's given new hope to the idea that the Yankees can be OK if they can just stem the tide early, hang around, and get healthy in the next few months.
Posted by Unknown at 11:00 AM