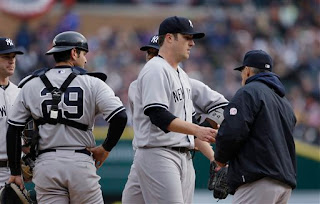 - Lyle Overbay: 2-4, 1 2B, 2 RBI.  Small sample size, but Overbay has looked good at the plate in his first few games and given the team exactly what they expected defensively.

Once again the Yankees are left to try to salvage something out of a series.  They'll have a tough road to go to do that even with CC Sabathia on the mound as he's opposed by Justin Verlander.
Posted by Unknown at 6:44 AM