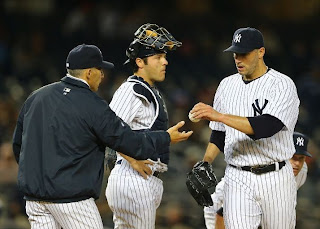 - Pettitte: 4.1 IP, 10 H, 7 ER, 1 BB, 3 K.  Just a complete dud from Andy.  He didn't have any command or movement on his pitches, his cutter was terrible, he never seemed to get in sync with Austin Romine, and he got tuned up by a team of barely Major League-caliber hitters.  Just gotta chalk it up to a bad night.

- Jayson Nix: 0-4, 5 LOB.  There's no reason for Jayson Nix to be hitting 6th in a Major League lineup, and the longer Kevin Youkilis is out with his back problems, the more we're going to be reminded of that fact.

The good news is that the Yanks get a chance to redeem themselves tonight and they do it with stopper Hiroki Kuroda on the mound and a rested bullpen core behind him.  The incredibly hittable Phil Humber makes the start for Houston.
Posted by Unknown at 7:17 AM