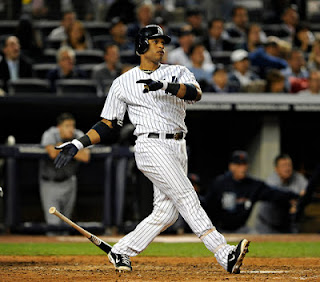 Mark Teixeira- I had Teix penciled in as a Rebound candidate yesterday morning.  I really had faith that he would stay healthy and jump back up to a 30 HR/100 RBI guy again this season.  Don't see that happening now that he's missing at least a month and a half of games and is going to be saddled with a nagging wrist injury all year.  He'll still draw walks and hit some homers when he returns to the lineup, but now I'm thinking his end-of-the-year line will look a lot like last year's.

Robinson Cano- The problem with Robbie is that there isn't much higher for him to go with his production.  I think he's going to have a monster season in a contract year this year, and everybody else dropping like flies around him will strengthen his MVP candidacy, but I don't see him jumping into crazy Josh Hamilton/Jose Bautista power territory.  .325/.380/.550, .405 wOBA, 30-35 HR, something like that.  It's outstanding, but it's right about where Robbie has been and right where he should be.

Alex Rodriguez- You might think I'm crazy, and I swear it's not just because his name is in the title of the blog, but I think A-Rod will be productive enough to match what he did last year when he returns from his hip surgery.  He had an early boost in production when he had the surgery to his other hip, he'll be avoiding half a year of wear and tear on the rest of his body, and he still knows how to handle a bat.  The ideal scenario would be for him to hit 13 HR to kick in his first milestone bonus and not have it affect next year's payroll budget, and I think he'll have just enough energy and health to do that.

Travis Hafner- Pronk is about as predictable a player as there is in baseball today.  He's going to draw walks, he's going to hit monster home runs, and he's going to get hurt and miss a lot of games.  Wash, rinse, repeat.  The Yankees knew what they were getting when they signed him and there's no reason to expect anything to change now.

Chris Stewart- When you're a career .217/.281/.302 hitter in under 400 plate appearances, there should be nowhere to go but up.  But when you're a glove-first/no-hit player like TCS to begin with, the best we can really hope for is him not getting any worse and I don't expect he will in 2013.  He'll draw some walks here and there, squirt a few cheap singles through the infield to score a run or two, but that's about it.  The more important thing for Stewart is that he doesn't slip defensively, so it'd be nice to see him clean up his throws to second base before the season starts.

CC Sabathia- He's been a horse for the Yanks since the day he put on the uniform, and even coming off elbow surgery and working on a new ST plan to limit his early-season workload there's no reason to expect that to stop now.  CC's K and BB rates last year were actually the best he's posted as a Yankee, and he did that with the elbow nagging him every step of the way.  Now that he's got the elbow cleaned out and shaped up again, CC should be in for another ace season.  He doesn't turn 33 until July, so he's not quite out of his prime just yet.

Mariano Rivera- As concerned as I was about his ability to come back and be the pitcher he's always been after he first hurt his knee last season, there's no way I'm going to sit here and say I think Mo is going to have a declined season.  It's not going to happen.  He should get into his first spring game this Saturday, and based on the reports coming from his bullpen sessions it doesn't sound like he's lost anything.  Short of having his right arm chopped off, there's nothing that can happen to make me think Mo isn't going to be Mo this year.

David Robertson- Last year was the regression year for D-Rob after his dynamite 2011, and even then he regressed to a 2.67/2.48/2.67 slash in over 60 IP.  This is more in line with what a "normal" dominant reliever does and this is the type of performance I expect D-Rob to repeat in 2013.  He's improved his command dramatically in the last year, and seems to be the #1 pupil from the Mariano Rivera School of Cutter Throwing.  He's still got outstanding stuff and still comes up big in the biggest spots.

Clay Rapada- Call me crazy, but I think there was something legit about what Rapada did in 2012.  His BABIP was actually higher than it was with Baltimore in 2011, his K and BB rates were slightly worse, and yet he still managed to pitch to a sub-3.00 ERA as the second LOOGY.  The biggest positive change to Rapada's game was his GB rate of 45.8%, a career best when you consider the higher IP count last season, and that's what drove his turnaround.  Rapada has learned to keep the ball down in the zone, and his offspeed stuff is tough to hit when he locates.  He's very capable of repeating last year's performance.