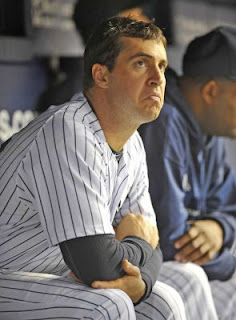 
- First things first, this is an absolutely brutal injury.  Brutal.  There's no other way to describe it and no way to attempt to find a silver lining here.  Even the "at least it was early in the season" argument doesn't carry much water in my book in this instance because we aren't talking about a broken bone that just sets and heals.  We're talking about an injury to a body part with lots of moving pieces that tends to linger and not get better.  Wrist injuries always sap hitters of their power and the Yankees were already a bit short in that department.

- As a point of comparison, think back to last season when Jose Bautista suffered a similar injury, originally in a game against the Yankees if I'm not mistaken.  He was in and out of the lineup for two months after it happened, resting and rehabbing and suffering setback after setback when he tried to swing a bat again before finally deciding on season-ending surgery.  The Yankees' plan for Teix is four weeks of rest and then 4-6 of rehab, but based on recent history it's probably going to take more than that for Teix's wrist to fully heal.

- The Yankee lineup is in absolute shambles right now.  If the season started today, you'd see Dan Johnson at first, Eduardo Nunez at shortstop, and probably Melky Mesa in center field.  Brett Gardner and Robinson Cano would be the only players from the 2012 starting lineup left in the 2013 version.  I honestly don't even want to see what kind of runs/game output this current lineup would generate.

- As far as outside replacements go, Cash did state that the team will check the market on corner infielders, but there's just not much out there right now.  On the free agent market you're talking about Aubrey Huff (sucks), Miguel Cairo (sucks), and Carlos Lee (sucks less).  A few players will fall through the cracks later this month when more roster cuts happen, but they'll likely be of similar caliber to the three I just mentioned.  And if you're thinking about an in-house option in the Minors, forget about it.  Luke Murton?  Kyle Roller?  Yeah, no.

- The best in-house option, if the Yankees don't add anybody, is to move Kevin Youkilis to first base while Teix is out and plug either Nunez or Jayson Nix in at third to start the season.  That would require Derek Jeter being ready for Opening Day, which is still a less than 100% certainty, but it would be the best use of their current IF depth and would help keep Youkilis healthier.

- If Cash were inspired to pick up the phone and test the trade market, the options get a little better.  The Yanks certainly aren't prying Eric Hosmer away from KC, but they could take a shot (if they haven't already) at Casper Wells.  Put him to the outfield to start the season, move Juan Rivera to first base in the interim, and when Teix comes back Wells and Ichiro can be the RF platoon.

- Dom Lanza thought that idea sounded depressing, and it actually really does.  So if you wanted to get a little more exciting you could say this is the perfect opportunity for the Yankees to say "screw it" and try to trade the farm for Giancarlo Stanton.  He would replace Teix's production, really lengthen the lineup when Teix and C-Grand both came back, and help the team's age and payroll situations.  It would come off as a desperation move, but Stanton is the type of player you make that move for.  He's not much older than any of the Yankees' top positional prospects and is already better than any of them are likely going to be.

- Not that I'm admitting I had any karmic effect on what happened to Teix, but the next time I write a post singling a player out as a critical part of the team's success I think I'm just going to delete it.

- It's not like Teix's defense ever gets glossed over, but once again this will shine a light on just how valuable he is at first base.  With Nunez expected to get plenty of early playing time one way or another, and his tendency to just wing throws to wherever, it could get ugly at first without Teix there to bail him out.  Johnson hasn't exactly been putting on a Tom Emanski clinic in the field so far.

- Pitching was going to be more important than ever this year, and now in April it becomes really important.  The first month's schedule isn't a cakewalk, although it isn't exactly a gauntlet either, and the Yanks can't afford to get poor starting pitching if they want to tread water.  And they absolutely cannot have CC, Kuroda, or Pettitte get hurt.

That's it.  That's all I got right now.  In the days to come I'm sure I'll settle down and put together something more composed about how the Yankees can manage to overcome this, but right now I just can't see it.  They're taking on water big time and we're still 3 weeks away from the season even starting.  Things aren't good in Yankeeland at the moment.  They're just not.
Posted by Unknown at 10:00 AM