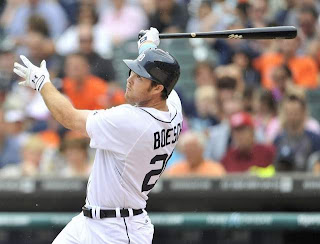 Like a big time hacker.  According to FanGraphs' PITCHf/x tool, Boesch swung at 40.2% of pitches out of the strike zone last year, up from his O-Swing rate from 2011.  He also did this while managing to decrease his percentage of swinging strikes at pitches IN the strike zone last season, so there's clearly not a whole lot of pitch recognition or plate discipline skills at work there.

2) He swings and misses a lot

10.0% Swinging Strike rate last year along with a career worst 20.7% K rate.  Not Mark Reynolds or Adam Dunn levels of bad, but not a good sign for a young player.  Combined with the high swing rates in general, this is indicative of a player who the league has adjusted to to exploit his weaknesses and who has failed to readjust himself.

Always has been.  Three straight years of negative UZR ratings, 2012's -12.0% being the worst to date.  The Yankees don't need more bad outfielders behind Hughes and Nova.

I'm all for the Yankees bringing in more guys to compete for a bench spot, but Boesch is hardly a better option than anybody in camp right now.  His profile doesn't mesh well with the Yankees' style or needs, and the Tigers giving up on him at such a young age is a sign that they don't believe he's capable of turning his negative trends around.  I'll pass on that.
Posted by Unknown at 11:47 AM