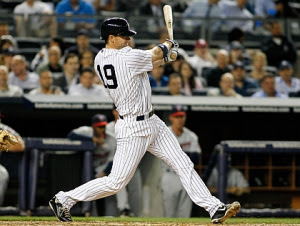 
THE Chris Stewart- If I had to pick, I'd give Stewart a leg up on Cervelli in the camp competition for the starting job.  The Yankees thought enough of Stewart (or not enough of Cervelli) to trade a good pitching prospect for him last season, and Stewart clearly has fans in the front office because of his positive defensive ratings.  He can put the bat on the ball, but that's about as far as his offensive skills go.  Stewart hit just  .241/.292/.319 in 157 PA last season (.272 wOBA), so the bulk of any value he provides will come from his work behind the plate rather than at it.  Stewart also gets a bonus point for having the most recent experience with the current pitching staff.

Francisco Cervelli- He'll have a chance to make up for last year's snub by winning the starting job in camp, but his battle was already going to be an uphill one because of his participation in the World Baseball Classic and it got a little steeper earlier this week when his name was mentioned in connection with the Biogenesis clinic in Miami.  Cervelli has denied any wrongdoing, but the possibility of him being suspended if MLB discovers anything could make the Yankees wary of committing to him as their starter.  If nothing comes of the investigation, Cervelli should be penciled into the backup job at worst.

Austin Romine- The wild card in the catching competition this spring, Romine is trying to make up for lost time and stay healthy for a full season this year, and couldn't have a better opportunity to earn himself the starting job than what's in front of him now.  It's been stated by Cash, Newman, and maybe one other Yankee exec that Romine is going to start the season in Triple-A, and I can understand the logic in that to get him back into an everyday groove, get him more ABs, and to see if he can stay healthy.  But I still believe that if Romine greatly outperforms the 2 ahead of him in camp, there's no reason to not bring him north with the Major League club.

Bobby Wilson- Another defense-first catcher who can't hit worth a damn, Wilson was brought in as emergency insurance depth and could have an outside shot of making the Opening Day roster if injuries strike the other guys because he has Major League experience.  Wilson bats and throws right-handed and owns a .208/.272/.321 slash (.264 wOBA) in 447 career Major League plate appearances.  Realistically he's best suited as Romine's backup in Triple-A.  From an entertainment standpoint, I'd love to watch him and Stewart have a HR derby just to see if one of them could even hit 2 consecutive balls to the warning track.

The Rest- The gaggle of MiL catchers who got an invite is an even mix of legitimate prospects and organizational filler, but all of them are really here to just provide extra catchers for all the pitchers in camp.  Yankee brass will definitely have their eyes on Gary Sanchez and J.R. Murphy to see how their bats and glove work stack up against Major League-caliber competition as they plan for the future.  Francisco Arcia and Kyle Higashioka will probably get a lot of the bullpen and late-game bitch work before the first round of camp cuts send them back to the Minors.