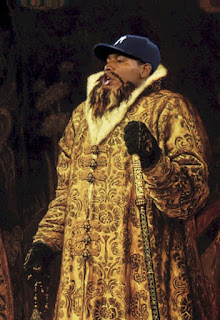 Despite a horrid 2012 season that was more reminiscent of throwing batting practice than building on a strong finish to 2011, Nova comes into camp as the odds-on favorite to win the 5th starter job.  He's got a larger body of work to evaluate than his main competition, and even though the most recent addition to that body of work was ugly, more experience usually translates to a better chance of winning the job in Yankeeland.  Nova is still just 26 years old, still learning to harness and optimize his stuff, and has his K and BB rates trending in the right direction.  He's also not short on confidence, which can be frustrating when he's struggling but also reassuring when one is left to wonder how last season might affect him.

There's only one pitcher in camp with a real chance of ripping that job away and that's Phelps.  He served the swingman role well last year in his MLB debut, and raised his ceiling as a Major Leaguer by displaying advanced poise on the mound for a pitcher his age and stuff that played up better at the Major League level than it did in Triple-A.  His splits as a starter in 2012 (3.77/4.49/4.16, 8.48 K/9, 3.61 BB/9 in 57.1 IP) weren't as strong as his reliever splits, but were still pretty good for a first-year starting pitcher.  Once thought of as a 5th starter/long man at best, Phelps has a real chance to be a solid mid-to-lower rotation starter with some refinement to his game and more experience.

Experience might be what keeps Phelps from making a real run at the job, though, specifically his experience working out of the bullpen last season.  In the same way Nova's starting experience makes him a favorite for the 5th starter role, Phelps' as the long reliever will make him the ideal candidate for that role In Joe's eyes.  He'll still be the first in line to fill in if somebody gets hurt, but it will take a monumental ST performance from him and a monumentally bad performance from Nova to swing things in Phelps' favor.

Realistically, Adam Warren has no shot at winning the 5th starter job unless Nova AND Phelps are brought down by some combination of injuries, sickness, kidnapping, alien abduction, zombie apocalypse, or just the straight up end of days.  His 8-hit, 2-walk, 6-earned run spot start against the White Sox last season did little to inspire confidence in Joe and Larry Rothschild that Warren is a viable option going into camp, and his real role this season will be as the anchor of the Triple-A rotation.

At the same time, it's not like Warren is short on motivation this spring.  2013 will mark his third straight year in Triple-A, the point where you either break into the show and establish yourself as a real Major Leaguer or fall off the prospect radar completely and fade into bolivian.  He's going to have opportunities to pitch and impress the Yankee coaches, and if he does Warren can put himself in line to be the next man up in the event that something does happen to Nova and Phelps.  Stranger things have happened...