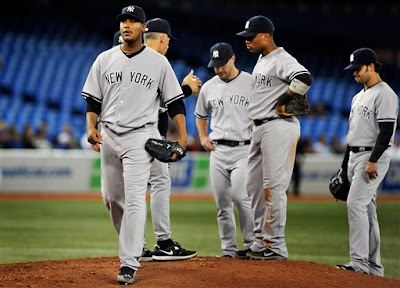 The biggest non-Mark Teixeira piece of news to come out of Yankeeland yesterday was Joe's pregame announcement that it would be David Phelps, and not Ivan Nova, who would be taking the ball for tonight's game.  At the time, this game was still a potential must-win for the Yankees to keep pace in the AL East race, a situation that has changed after the Yankees won and the Orioles lost last night.  With the way Nova has pitched in his last 2 starts and for almost the entire season, there was no way he could be allowed to take the ball in a game that important, and even though the critical nature of tonight's game has been slightly lessened, it's still a game that has a lot riding on it.  Phelps is a better option than Nova right now, that much is certain.  But looking longer term, what does this decision say about both guys moving forward?

For Nova, this demotion to the bullpen marks the nail in the coffin for his 2012 campaign.  There's no need to rehash how bad Nova has been this season; the numbers speak for themselves.  Any time you can set a franchise record as dubious as "Most XBH Allowed in a Single Season" and do it in fewer than a full season's worth of starts, that's pretty brutal.  Nova has gone from being a late-season ROY candidate last year and "starting" Game 1 of the ALDS to not even being trusted to pitch an important game against a Triple-A lineup.  There's no chance the Yankees bring him on the postseason roster unless they absolutely have to, and Nova's status for 2013 becomes a big question.

On the one hand, he's still just 25 years old, will turn 26 before the start of next season, and has put together 2 consecutive years of 160+ IP.  His stuff has proven to be better than advertised, and although it ultimately ended up being a failed effort, he did make adjustments to his approach this season to pitch to his better stuff, increasing his strikeout numbers and decreasing his walks in the process.  On the other hand, the results Nova generated this season bring back all the questions that previously followed him relating to his potential, his ceiling, and how he fits into the Yankees' future plans.  With the team needing to address its aging lineup in the coming years, Nova could be a candidate to sell low on in an offseason trade based on this huge step back.

For Phelps, this decision finally answers the question I've been asking all season about how much faith do Joe and the organization have in him and how do they plan on using him this year and in their future plans?  I've been practically begging for Phelps to get some high-leverage work, and it doesn't get much more high leverage than making a last-minute spot start with the opportunity to lock up the AL East title on the line.  It's a high-pressure situation for sure, and it's a situation that the decision makers have decided Phelps is capable of handling.  Phelps has earned himself this opportunity and can use this start tonight to earn bigger future opportunities.

Like Nova, Phelps has proven to be better than advertised in the stuff department, and he's shown command and poise beyond his years at times this season.  His very good body of work over the course of this season finally appears to be paying off for him with this opportunity, and while this promotion still doesn't guarantee him a spot in next year's rotation, it certainly gives him a better position going into camp in 2013.  Another good start tonight will only serve to further strengthen that position.  Essentially, Phelps has become this year down the stretch what Nova was last year, and as a young, cheap pitcher under team control for the next handful of years to come, his stock is clearly on the rise.

The slope of a young pitcher working to establish himself in the Majors is always a slippery one.  That slippery slope can be damn near impossible to walk on for young pitchers in the Yankee organization, who always have the possibility of being replaced and cast aside hanging over them due to the team's "win now" mentality.  Nova and Phelps have experienced the good and bad of that slope this season, with Nova falling flat on his face and tumbling down and Phelps navigating his way up with toughness and consistency.  Their paths are pretty much set for the rest of this season, and they are starting to be laid out for next.  Where it goes beyond that is anybody's guess.
Posted by Unknown at 10:26 AM