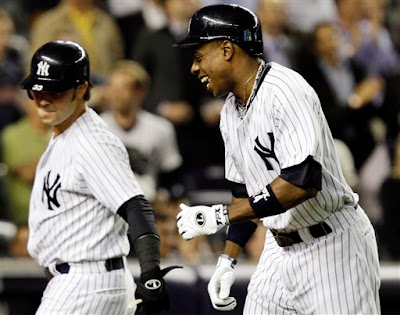 - Sabathia: 8 IP, 4 H, 2 ER, 1 BB, 7 K, W.  3rd straight dominant start, 3rd straight 8-inning start, and as good as he looked it's pretty easy to say that CC could have shut this Fraud Sawx lineup down completely if he wanted to.  He pitched to the lead he had, gave up a few hits and runs here and there, and got his work in.  Fastball was lively, slider was almost unittable when he located it, and he worked his changeup into the mix well.  The injuries are in the rearview now, and he's back to being the ace.

- Alex Rodriguez: 0-3, 1 RBI, 1 SF, 2 K.  Didn't feel like getting in on the offensive onslaught, huh?  That's cool.  Just get your shit together before the playoffs start, alright?

The lineup that Bobby V put out last night made it pretty clear that the Fraud Sawx are just laying down in this series, maybe as a way to get some late revenge on the O's for last season.  Those O's lost last night, giving the Yankees a 1-game lead and a chance to lock up the division tonight with a win when David Phelps takes Ivan Nova's spot in the rotation.
Posted by Unknown at 7:18 AM