Yanks Better Be In On Kottaras 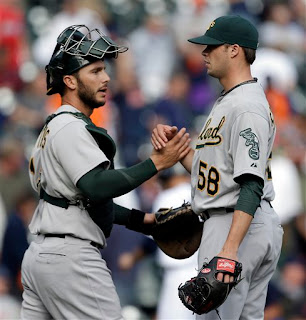 (He can't be worse than Cervelli.  Courtesy of the AP)

The Yankees' involvement in trade talks with Washington had barely got off the ground last week when the Nationals swung a 3-team deal with Seattle and Oakland to trade Michael Morse to the Mariners.  He addressed their desperate need for offense without being a great fit for the system, and once again the Yankees found themselves on the outside looking in as a good right-handed bat passed them by.  But there was something else that came out of that trade that could help New York.  Oakland had to clear a 40-man roster spot to make their part of the trade work, and they did that by DFAing catcher George Kottaras, who they had just re-signed to a 1-year deal to avoid arbitration.  Their current catching situation being shaky at best, Kottaras presents the Yankees with an opportunity to add some depth and some offensive skill to the position.

The 29-year-old Kottaras is well-traveled in his 5 short years in MLB, spending time in Bahhston, Milwaukee, and most recently Oakland after he was picked up by the A's for their stretch run in 2012.  He's a lefty swinger, which is rare for a catcher, who makes his living on drawing walks and power.  Kottaras owns a .220/.320/.412 career line (.322 wOBA) with a 13.9% BB rate and a .193 ISO.  He's not going to make a lot of contact, but as a part time player Kottaras makes up for it by getting on base at a decent clip and being a power threat.  Last season he posted a career best 17.7% BB rate and hit 9 HR in just 209 total PA.  He's got a noticeable platoon split, hitting just .194/.336/.323 in 153 PA against left-handed pitching, but overall his offensive skill set is well-suited for the Yankee lineup.

Defensively, Kottaras is nothing if not average.  He rated as Beyond The Box Score's 26th-best defensive catcher in 2011, with an above-average rating, but regressed some in 2012 and doesn't really have any standout defensive characteristics.  His glove work is OK, his movement and pitch blocking are decent, and his framing skills are meh.  Where Kottaras really struggles is in throwing runners out.  He threw out just 8 of 46 attempted base stealers last season (17.4%), and for his career he has thrown out just 24 of 150 (16.0%).  For the sake of comparison, Russell Martin threw out 20 of 83 last year (24.1%) and Chris Stewart threw out 8 of 35 (22.9%), so it's fair to say Kottaras' weak arm could be a problem against team who like to run, of which there are a few in the AL.

Kottaras is far from a perfect player, but his all-around passable defensive skill set and much better offensive game make him just as viable a starting catching candidate as the current in-house Yankee options and probably a better one.  His 2013 team contract is a friendly one and he's arbitration-eligible through 2015, so the Yankees wouldn't have to worry about making a major financial commitment to him or the position anytime soon.  If the Yankees could find a way to mask his weak arm, Kottaras makes a lot of sense as a cheap signing to address their position of greatest need.  It would probably cost them one of their current catchers to open up a roster spot, but that's a trade-off I'd be willing to take to upgrade offensively.

Cash has been saying all along that his current starting catcher is already on the roster.  How the Yankees handle Kottaras being available will be the truest test yet to the validity of that statement.
Posted by Unknown at 7:41 AM