Would The Yankees Really Go To Tampa With What They've Got Right Now? 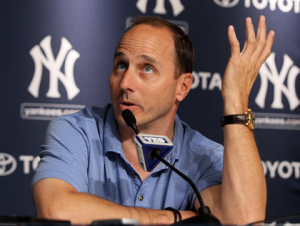 I didn't write about it last week when the comments were made because it didn't tie in to the Prospect Week theme, but Cash made some head-scratching statements to our buddy Wally Matthews about the Yankees' current roster makeup and the stance they're taking as the offseason winds down and moves into the preseason.

“I know it’s getting late, but we’re still looking."

It's just 2 short sentences, but there's a lot to take from those statements.  "Getting late," "still looking, " open for business," and "If we have to... " all lend some possible insight as to exactly what the situation is at the top levels of the Yankee decision-making hierarchy and how Cash feels about it.  By now, I'm assuming he's as fed up with the penny pinching as most of the fanbase is and is just trying to get through the offseason by creating as few a number of waves as possible.  But as the guy whose job it is to construct the best team possible, can Cash really be serious about going to Tampa with what he's got?

By my count, there are 21 players on the active roster right now who are locks for a spot on the Opening Day roster: CC, Hirok, Andy, Hughes, Nova, Phelps, Mo, D-Rob, Logan, Joba, Aardsma, Rapada, Teix Cano, Jeter, Youkilis, Ichiro, C-Grand, Gardner, and any 2 of the 3 active catchers.  That leaves 4 spots up for grabs- a DH position and 3 bench roles (4th OF, utility IF, utility corner IF) that need to be filled.  The good news, if you want to call it that, is that the Yankees at least have their Opening Day starting lineup intact.  The bad news is that the pickings are slim to fill the other 4 spots from what's currently available.

From the active roster, the leading candidates to fill those spots would be Eduardo Nunez, Corban Joseph, David Adams, Melky Mesa, and Russ Canzler.  Nunez can play 3 infield positions and the corner outfield spots, none of them well, but seems destined for the utility IF role if he makes the team.  CoJo and Adams are both best-suited as second basemen, with Adams having limited third base experience.  They could conceivably function as a lefty/righty DH platoon, but setting that up with 2 guys who have 0 combined Major League ABs wouldn't be an ideal situation.  Mesa can play all 3 outfield spots and DH if needed, and Canzler has the ability to play outfield and first base and could also be a righty DH candidate.

If none of that sounds appetizing, the Yankees could look to some of the guys not on the active roster.  Matt Diaz and Gil Velazquez received non-roster invites to big league camp, and Jayson Nix and Ronnier Mustelier are candidates to compete for the utility IF, 4th OF, a/o DH jobs.  But as expected, the talent level of this group is a little less than that of the players already on the 40-man, and the expected ceiling in production a little lower.

The issue with this large group of players, those on the active roster and those who aren't, is clearly not quantity-based.  There are more than enough players with more than enough positional flexibility to cover the 4 open roster spots.  The issue is with the quality of production that any of these 4 can be expected to provide.  Based on past performance and career history, the Yankees would be looking at replacement-level production from this group at best, and that's where the question comes in relating to the team's, and Cash's, actual willingness to "go with what we've got."

If I had to guess, I'd say Cash's statements were more along the lines of trying to be strategic about his negotiating position, because there are still players out there who would greatly help the Yankees and would not represent making a move just to make a move.  But at the same time, with as strictly as ownership has stuck to their guns on not wanting to add payroll, it wouldn't come as a shock (although it would be a disappointment) if the Yankees really did stand pat and went to ST looking to fill their open roster spots from their internal cache.  Cash indicated that they are still "open for business," but failing to follow through and conduct a meaningful transaction would be another strike against the "we're still trying to win a championship this year" stance from ownership.
Posted by Unknown at 4:00 PM