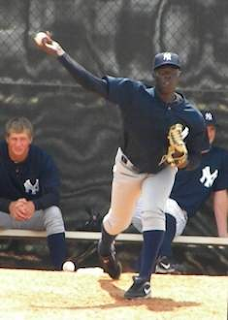 We're just over a week removed from the AB4AR Top 30, and just over a month removed from John Sickels releasing his Top 20 Yankee prospects with the bulk of prospect ranking season still to come.  Sickels followed up on his individual rankings yesterday with his organizational farm system rankings, and he had the Yankee system coming in 14th out of 30, up from 16th last season.

Not surprisingly, Sickels identified the core of A-ball hitters as the Yankees' biggest strength and their lack of upper-tier pitching prospects as their biggest weakness.  He also continued to paint Rafael DePaula as the key part to determining where the Yankee system could be heading next year, sticking DePaula with the "wildcard" tag he first gave him last month.

A 14th place ranking is right in line with where most people expected the Yankees to fall (10-15), and as was the case with Baseball America's 11th place ranking I believe this is a positive sign for the Yankee system to move up in the overall organizational rankings a year after losing their previous top 2 prospects.  A strong 2013 season for this group could result in a top 5-10 ranking in 2014.
Posted by Unknown at 2:33 PM