The Young Guys Most Likely To Contribute In 2013 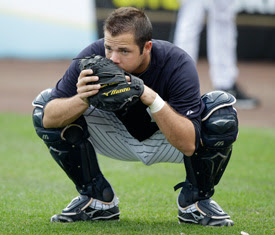 (Opening Day catcher?  Don't rule it out.  Courtesy of the AP)﻿

There's still the possibility of a blockbuster trade, something I think almost all of us are secretly hoping for after the excitement-less Winter Meetings.  But with the Yankees holding firm on their free agent signing plans for this offseason, and with that plan assuredly continuing into the next offseason when the payroll goal will loom largest, the likelihood of the Yankees having to use their top-level Minor Leaguers as more than just emergency filler or roster expansion fodder is very high.

We all know the Yankees don't have much high-impact, high-level talent in their system, but that's not to say they don't have players capable of contributing as useful bench or bullpen pieces or even winning a starting job if it comes to that.  The only "top" prospect with a shot at making the show in 2013 is Tyler Austin, and even that is a longshot, but here are some other guys who could see some significant PT at the Major League level next season.

I know 2012 was a lost season for him, I know he didn't hit in the AZFL, I know he hasn't hit much at all since making it to Triple-A, and I know he needs more ABs to try to get his offensive game back together.  I also know that the Yankees are probably heading into spring camp in 2013 with a collection of hot garbage to pick through to find their starting catcher (no offense, guys).  With Russell Martin on his way to Pittsburgh, Jesus Montero out in Seattle, and the luxury tax goals looming, this is probably Romine's best shot at breaking in as the Yankees' catcher of the future.  Fellow TYA writer Mike Jaggers-Radolf wrote about this yesterday, and while he didn't have an especially rosy outlook on Romine's potential, I'm of the opinion that if Romine impresses in ST there's no reason not to take him on the Opening Day roster.  Even if he doesn't make the team out of camp, Romine is going to be on the cusp of getting called up all season as long as he stays healthy.

A little bit of a stretch considering Adams is still in Double-A, but with the investment the Yankees put into Adams in 2012 (trying him at third base, sending him the AZFL) it's pretty obvious they have bigger plans for him than they do for Corban Joseph.  CoJo's limited defensive skills and late power breakout this season make him an ideal add-on as part of a trade package, while Adams' defensive flexibility and more well-rounded offensive game make him an attractive option as a utility infielder on the bench.  The competition won't be too steep, and now that he's come all the way back health-wise from his ankle injury Adams could find himself on the fast track to Triple-A and the Majors if he's swinging a hot bat early in 2013.

What do you do when you have a subpar defensive player with no natural position who can rake?  You find a way to shoehorn him into the lineup.  That's basically what the Yanks have done with Mustelier in the Minors since they first signed him before the 2011 season.  He doesn't have the skills to handle second or third base, even though he could probably fake third in a pinch, so he was used primarily in the outfield in 2012.  But on a team that was painfully rigid in their roster breakdown this past season, Mustelier could be a useful piece because of that bat.  Dude doesn't draw a ton of walks, but he makes a lot of contact and hits for good average and power.  At 28, he's way beyond the age limit for being considered a "prospect," but he could be a great fit for a club trying to build their bench on a budget.

If it seems like Mesa has been around the Yankee farm system forever, it's because he has.  A lot of players have come and gone since he made his Rookie League debut in 2006, and Mesa found himself on the Yankee bench to end 2012 after going 20-20 across the top 2 MiL levels.  My conspiracy theory about Mesa taking Andruw Jones' roster spot didn't pan out this year, but that bench spot is one that still needs to be filled for 2013 and Mesa's skill set should make him a prime candidate if he has a strong spring.  He has power, speed, and plus defensive skills, all things that translate well to a 4th outfielder role, and like Mustelier he's getting a little long in the MiL tooth (turns 26 at the end of January).

Sooner or later I'm going to have to come up with a clever nickname and possibly a Photoshop for Montgomery, and by the looks of how quickly he's mowing through the Minors it will probably have to happen sooner.  Amongst the Yankee brass and coaching staff, it's probably already an unspoken agreement that Montgomery's name will be at the top of the list for bullpen reinforcement duty once the season starts.  If the rotation gets hit by injuries early, it also wouldn't surprise me to see Montgomery get bumped up to the 'pen to allow David Phelps to fill in for an injured starter.  Montgomery's stuff is just too good to waste in the Minors, and if he isn't pitching out of the Major League bullpen by the end of the summer I would be shocked.

Whitley isn't nearly as sexy a prospect as Montgomery, and definitely hasn't gotten the coverage Montgomery has, but he's no slouch himself.  Whitley has advanced through the entire MiL system in less than 3 full seasons, putting up consistently good but not eye-popping numbers along the way, and will still be just 23 at the start of next season.  He was every effective in over 80 Triple-A innings this past season, striking out 66 batters to 25 BB and posting a 3.25/3.70 ERA/FIP slash, and his improving slider could turn into an effective out pitch to go with his assortment of fastballs.  He won't get any "next D-Rob" comparisons, but Whitley could definitely contribute some of those classic Yankee under-the-radar bullpen innings that help the team every year.

It wouldn't surprise me if the Yankees went with all veterans to open the season and none of these guys made the team out of camp, just because that's the Yankees' MO.  But the time for them to hold their younger players back is quickly coming to an end.  They're old, they're playing things cheap, and they need to find some diamonds in the rough to help build for the future.  There very well may end up being other MiL names who force themselves into consideration, possibly even The Mediocre Relief Pitcher Formerly Known as Dellin Betances, but if I were a betting man these are the names I'd put my money on for getting some run in 2013.
Posted by Unknown at 12:55 PM