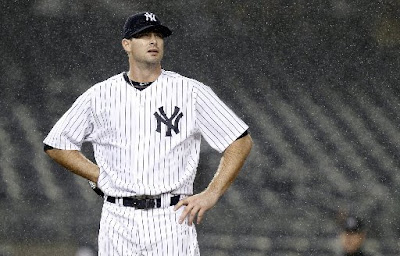 A year after having a career-best season in 2011, Logan was surprisingly close to replicating that season in 2012.  He pitched to a 3.74/3.67/3.70 slash line with a 28.5% K rate and 11.06 K/9, both new career highs, and held left-handed hitters to a .230/.293/.372 slash against (.289 wOBA) with 42 strikeouts in 32.0 innings pitched.  His split against right-handed hitters wasn't as solid (.331 wOBA against in 23.1 IP), and his walks did spike back up a year after he seemed to find better command of both his fastball and slider, but Logan is still serviceable at worst against hitters from both sides of the plate and pitched a lot of important innings for the Yankees this past season.

And that is where the opportunity to sell high on Logan comes in.  Along with his very good strikeout numbers, Logan also set new career highs in appearances (80), IP (55.1), total batters faced (239), and walks (28) in 2012.  As a pitcher who has traditionally been a specialist, the boost in workload was significant and noticeable in the negative impact it had on his performance in the second half of the season.  After giving up 8 ER, 2 HR, and 11 BB in 28.1 IP from April to June, Logan allowed 15 ER, 4 HR, and 17 BB in 27.0 IP from July through the end of the regular season in October.  We're not talking Torre-Proctor levels of overwork here, but enough that Logan's production seemed to suffer later in the season when the games mattered more, and that's not even counting all the times he got up in the bullpen to warm up without ever getting into a game.  With relievers already being a tricky group of players to project year to year, it wouldn't be a bad thing to get off the Logan train before it starts to slow down.

To that point, the Yankees are not without plenty of backup options to soak up those lost LOOGY innings should they move Logan.  Clay Rapada is still on the roster and was arguably better than Logan down the stretch this season (10.1 IP, 3 ER, 2 BB, 13 K from August through October).  He is absolutely unusable against righties, but as Joe showed with Logan in 2012, it's probably for the best to limit your lefties' exposure to opposite-handed hitters anyway.  The Yanks also added Francisco Rondon (80 K in 71.0 MiL IP) to the 40-man roster prior to the Rule 5 draft, kept the injured Cesar Cabral on the 40-man in hopes that he can come back and contribute in 2013, and have recent waiver pickup Josh Spence on standby in Triple-A.  They struck gold with Logan and Rapada already, and the Yanks appear to have stockpiled enough lefty arms to try to do it again.

There's also the issue of money.  Logan is hardly a bank breaker at $1.88 million in 2012, but he is in his final year of arbitration eligibility and he stands to get a raise from his 2012 salary that should push him north of $2 mil in 2013.  He's going to be a free agent after next season, and could very well be a casualty of the payroll crunch.  It's not much, but the million bucks plus saved from moving Logan and going with the dirt cheap Rapadas, Rondons, and Cabrals of the world does help the payroll cause.  Rather than lose him for nothing on the open market, the Yankees could get aggressive with Logan and try to turn him into a useful piece.

He won't bring back a major impact player on his own, but as part of a package or straight up for a smaller bench player Logan could have more value to the Yankees as a trade piece than as a member of the 2013 bullpen.  The combination of high 2012 workload, multiple internal replacement options, and a core group of righty relievers who pitch well against lefty hitters does make Logan somewhat expendable.  If the Yankees aren't already considering making him available to teams that need bullpen help, now might be the time to start that consideration.
Posted by Unknown at 11:48 AM