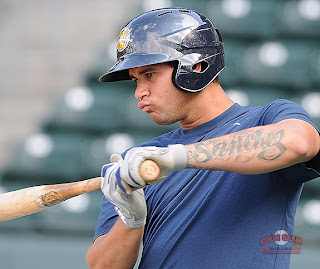 - Sickels' assessment of Sanchez as an incredibly talented player playing a premium defensive position who is continuing to improve defensively is right on par with my logic when evaluating Sanchez.  It's easy to forget how young he still is, but it still seems to me that Sanchez is ahead of where Jesus Montero was at the same age and people were infatuated with Jesus almost from the get go.

- I don't know if I could justify putting Austin ahead of Williams based solely on polish, as Williams has a much higher ceiling if he can continue to develop power, but it's hard to argue against ranking Austin high after the season he had.

- I'm more of a Brett Marshall guy than most, but even I was surprised by Sickels ranking him 5th.  Marshall had a strong finish to his 2012 season, but I need to see him maintain or improve his K numbers at Triple-A and continue to refine his offspeed stuff to consider him a real high-end Major League prospect.

- Sickels tends to lean more towards performance, but even he can't escape the allure of Angelo Gumbs' tools, rating him above guys with longer track records of success like ManBan, Ramon Flores, and Austin Romine.

- Good to see him keep ManBan in the top 10 despite his leveling out in performance and injury problems in 2012.  I have great concerns about Banuelos, but he'll still be very young for the Triple-A level by the time he returns and I think he's more than worthy of a spot solidly inside any top 10 list.

- Corey Black at 12 is an interesting pick, and Sickels is very high on the kid's velocity and makeup as a college player.  I'll have Black on my radar in 2013.

- Sickels is also very intrigued by Rafael DePaula, going as far as to imply that DePaula's success in 2013 could be the determining factor in where the Yankee system is finally graded as a whole.  I'm still withholding any kind of real judgment of DePaula until I see him start to pitch in the states.

- Like anybody who has familiarity with the Yankee system, Sickels sees a lot of depth and potential for future bullpen pieces and a lot of questions about the starting pitchers.  Certainly not a surprising assessment, but also not a particularly comforting one heading into 2013.
Posted by Unknown at 8:36 AM