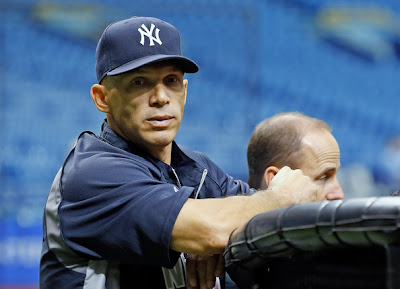 I took a few liberties with this, moving Gardner and C-Grand defensively and giving Jayson Nix a spot in the lineup even though he's not currently on the 40-man.  I don't think the Yankees re-signed him with the intention of him not starting the season over guys like CoJo and David Adams, although I suppose the Yanks could also go with Nix at short and Adams at third if they're really that sour on Nunez's defense.  Mesa at DH was just to keep the L/R balance; it could really be anybody left on the 40-man at this point, although all of them are about the same in terms of expected production.

This isn't a lineup that's going to win a lot of games, even if the rotation pitched well.  Kuroda got next to no run support last year when he had Jeter, A-Rod, Swish, and Martin in the lineup.  How much do you think he's going to get with Nunez in the 2-spot and Mesa in a run-producing position?  There's still plenty of time for the Yanks to make moves to improve this lineup and fill out their roster, and eventually they are going to do it.  But remember that there's still a lot of work that needs to be done.
Posted by Unknown at 9:19 AM