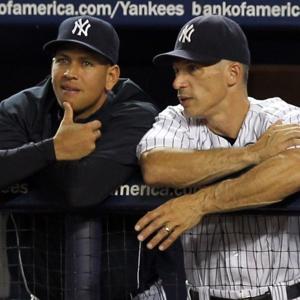 - The first thing I want to know is why the Yankees chose not to disclose the injury until now.  Both A-Rod and Joe took a beating in the postseason, A-Rod from everybody for playing so poorly and Girardi from some for benching him, and it turns out that beating could have been avoided if the Yankees disclosed the hip tear.  I guess they didn't want it to be an excuse or a distraction, but an injury like that is a perfectly legitimate excuse for A-Rod's poor hitting performance, and the situation with him was already a distraction.  The "A-Rod sucks" cloud was lingering over the team for the entirety of the ALCS, and it could have been lifted if the Yankees were just upfront about his injury.  I don't get it.

- I know the Yankees are hoping this surgery will get him back to full strength like the last one was supposed to on his right hip, but for all intents and purposes this injury ends A-Rod's career as an impact player, may end his career as an above-average player, and could end his career as an everyday player.  This was already a guy who had lost over 140 points in his SLG, 110 in his ISO, and 60 in his wOBA since 2008, and who failed to hit 20 HR in each of the last 2 seasons.  Now he's going to have not 1, but 2 bad hips for the rest of his career?  Not good.

- Consider this- If the season started tomorrow, the starting left side of the Yankee infield would be Eduardo Nunez and David Adams.

- Regardless of how he comes back from this surgery, I think it's time for the Yankees to start transitioning A-Rod to DH full time.  He's still a good defensive player, but his range will probably be limited now and that extra wear and tear on him in the field won't help his production at the plate.  The best the Yankees can hope for is a guy who can hit 15-20 HR and get on base a lot for the next 5 years, and the best way to get that is by limiting his PT and keeping him off the defensive side of the field.

- As with Russell Martin, this development has to change the Yankees' approach this week in their free agent and trade talks.  I think it's fair to speculate on the connection between A-Rod's injury and the team's failure to even offer Martin a contract.  Methinks they wanted to keep a little extra money in their pocket to address a backup plan(s) for A-Rod at third and were willing to take a hit at catcher to do it.  I'd also be willing to bet that this news has been the driving force behind the scenes for everything they've done/not done already this offseason.

- Off the top of my head, Kevin Youkilis and Mark Reynolds stick out as the top FA replacement options available, Reynolds even more so than he was yesterday.  Youk is similar to A-Rod at this stage in his career in that he's declining offensively and struggles to stay healthy, but a combination of both he and Reynolds could help stem the tide at third base, DH, and as backups to Teix at first until A-Rod gets back.

- As bad as his contract already was, this injury just puts the period on the end of the sentence that can now definitively state that A-Rod's 10-year deal was the worst contract in professional sports history.

- And just a reminder, Cash didn't want to give him that contract.

- Not sure where the Yankees go from here, but this is already shaping up to be a rough 2013.  With all the injuries, age-related decline, cheap platoon players, and no wiggle room to add depth and talent because of the payroll restrictions, the Yankees NEED to have their rotation stay healthy.  A few guys miss time here and there on the DL, or miss extended time like Andy did, and things could get real ugly.
Posted by Unknown at 12:53 PM

It's bad enough that the Yankee organization kept this a secret during the playoffs, but why the hell did they wait until now to get the surgery scheduled?!?!?! Two months have just about passed--maybe he could have been ready by late Spring Training.... But not now. Need some solid good news real soon on the Yankee front, or I'm gonna bleed out Yankee blue due to self-inflicted wounds.