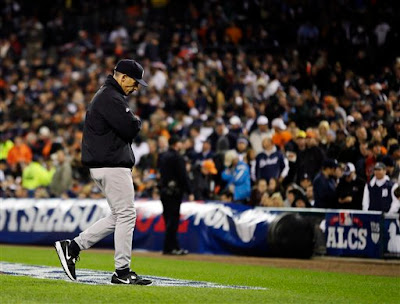 The general consensus was that playing hard through the end of the regular season would benefit the Yankees because they would still mentally locked in and would not lose any momentum by having guys sit and rest down the stretch like they would if the division was already locked up.  But for an older team like the Yankees, a team that was even more banged up than the poor Fraud Sawx and Blue Jays, did having to go all out for all 162 actually end up hurting them?

Admittedly I have no real substantial statistical evidence to support this theory, it's just simply a theory that popped into my head and hasn't left since the final out was made in Game 4 of the ALCS.  Here's what I know; the Yankees entered their game against Toronto on September 30th without control of their divisional destiny.  They had to beat Toronto that day, which they did, and then sweep Bahhston, which they did, to secure and maintain that control and the slim division title margin that came with it.  In those final 4 games they had to get 4+ innings of work from their bullpen hosses twice, once because of extra innings, they got an 8-inning start from CC Sabathia, and they had Derek Jeter on a bad ankle, Alex Rodriguez with a likely still-injured hand, and Mark Teixeira on a less-than-100%-healthy calf in the lineup every day.

The Yankees scored 33 runs in 39 innings of play in those final 4 games.  They scored just 22 runs in 91 innings over the 9 postseason games they played after the regular season ended.  Granted they had 3 days to rest before starting the ALDS series in Baltimore, but they had to travel to Baltimore to start the series, a lovely divisional championship parting gift from Bud Selig.  And 3 days isn't going to help fix a destroyed ankle, bone chips in elbows, or natural regression.

So what happened in those 9 games?  We all know the story now.  Jeter's ankle, between the wear and tear of the past couple months and the nonstop fouling of balls of it, finally gave out and he was done; A-Rod and Teix didn't swing for much power at all in the middle of the order; CC appeared to finally succumb to his elbow problems in the final game against Detroit; and the younger players disappeared.  What was Joe left with?  Old guys like Raul Ibanez and Eric Chavez who had already played way more than anticipated in the regular season, an outfielder with just a handful of ABs since April, and a bullpen that was setting team records for appearances and personal records for innings pitched.

I'm not trying to turn this into an excuse for the Yankees, but it's more than fair to say that this group probably wasn't firing on all cylinder in the playoffs even after their 3 days of rest post-Game 162.  The Yankees were an old, beat up ballclub that had to fight every step of the way just to get to the postseason.  As old and as beat up as they were when they got there, it could very well be that they were just plain out of gas by the time they got to Detroit.
Posted by Unknown at 8:00 AM