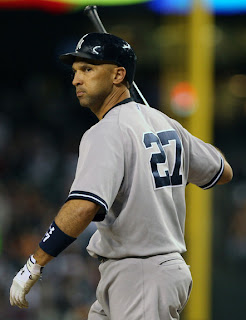 It's no secret that Andruw Jones and Raul Ibanez have been complete dog mess at the plate for a while now.  It should also come as no surprise that they've done a slow descent into below replacement-level production territory given how much more they've had to play this year because of injuries.  Jones' 264 total plate appearances are already more than he had last year, and Ibanez's 385 PA are much more than the Yankees envisioned him getting after seeing how poorly he produced over the course of 500+ the year before.  This is the risk you take when you fill your bench with old, limited players and it's finally coming back around to bite the Yankees at the most critical of times.  The question now becomes what do they do with them moving forward?

The signs of the Jones/Ibanez regression were starting to show around the All Star break, and they haven't gotten any better since then.  Since August 1st, Jones and Ibanez are a combined 21-148 (.142 BA) with 22 BB and 29 K.  Only 7 of their 21 hits have been for extra bases, and they've only driven in a combined 13 runs.  As good as their early-season power and run-producing production was, that's how bad it is now.  Personally, I was a little surprised to see the K total be so low, but the shifts in both players' contact rates help explain that a little.  The LD rates are well down from where they were earlier in the season, and they've been replaced by a lot of weak GB and FB contact.  It doesn't seem like they're flat out getting beat by the pitches that are being thrown to them; they just don't have the strength and energy they had earlier in the year to hit the pitches with any authority.

So what's in store for these two?  Joe already seems to have soured on Jones, starting Ichiro in the outfield in last night's game against a left-handed pitcher and going to Steve Pearce when he needed a right-handed PH bat later in the game.  One would have to think that a similar scenario for Ibanez isn't too far behind.  There's a chance that both of these guys could turn things around with some rest, but that isn't going to happen with the Yankees playing every day through the end of the regular season.  If they're resting, it means they're warming the bench and not playing, and that's really the only option left.

But where will they stand come postseason roster selection time?  It would be easy to say that neither Jones nor Ibanez is worthy of a spot with what they've done in the second half, and the Yankees have plenty of other platoon bats to choose from who also present more defensive value.  But with Mark Teixeira's injury status still up in the air, there's a chance that he might not be on the roster for the first playoff series.  If that's the case, then Jones and Ibanez might sneak onto the bench because of their veteran status and Joe's usual MO of trusting his veterans.

If there is any life left in either guy's bat, now would be the time to start showing it.  It's more than understandable that players their age forced into regular duty would tire come this time of year, but with Baltimore refusing to lose any ground in the division race the Yankees can't afford any more offensive slumps.
Posted by Unknown at 10:29 AM