He's also 13-14 in save opportunities, which, although not as important as the peripherals, is still a good stat to reference considering the hot streak the Yankees have been on.  He's getting a lot of chances to close games, and for the most part he's closing them with ease.  He's cut down on his walks, he's limiting damage when he does allow baserunners (which he does frequently), and he's brought stability to the late innings by being a reliable closing option.

With D-Rob back in the bullpen rotation now, Cory Wade and Boone Logan get bumped back down a bit, and suddenly the late-inning bullpen depth is back.  It all starts with Soriano being a rock in the 9th inning, and he's been that since being given that responsibility.  I'd still like to see some more 1-2-3 innings, but as long as he keeps runs from crossing the plate and saves the wins, that's good enough.

So there you go, Raffy.  I finally gave you some kind words.  Don't you feel better now? 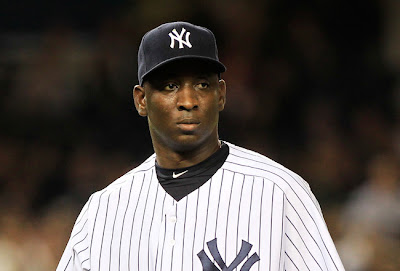 (Courtesy of Getty Images)
Guess not.﻿
Posted by Unknown at 11:19 AM