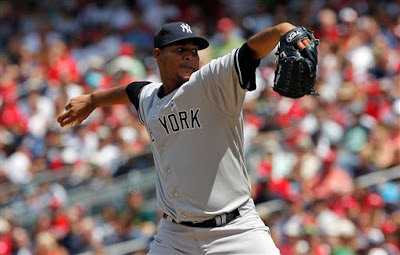 - Nova: 7.2 IP, 7 H, 1 ER, 1 BB, 4 K.  This Ivan Nova that we've seen in June is much more like the one that was the team's #2 starter in last year's postseason.  In his effort to cut down on his hits allowed and strikeouts, he's also limited his walks, so maybe he was onto something with his idea of getting back to who he was in 2011.

The Yankees are straight rolling right now.  I'm talking sittin' on 22's, murdered out windows, gangsta lean in the bucket seats-style rolling.  They just finished up smacking the Braves around last week and now they get to welcome Atlanta to their place for Round 2.  I know I'd love to see the winning streak get to double digits, and with the game being on the Worldwide Leader in Fraud Sawx Fans again, I might just have another live blog in me.
Posted by Unknown at 6:53 AM