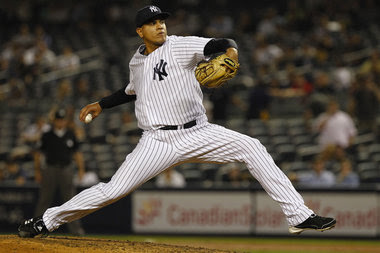 The command issues aren't improving, the performance is declining, and because Betances can't consistently throw strikes, he isn't pitching deep enough into games to make the jump in innings totals that he still needs to make to be able to pitch a full season as a starter. Do the math. 58 IP in 12 starts is less than 5 innings per start, and that's not going to get it done at the Major League level. It's not even getting it done at the Triple-A level, so what's the point in continuing to keep Betances in a situation and an environment where he isn't improving AND isn't upping his workload?

I don't want to run the Triple-A coaching staff down here, but they're in charge of managing Betances and working with him on his mechanics and the kid is experiencing a regression in his stat lines as he advances up the MiL ladder, which is the complete opposite of how it's supposed to work. To me, that suggests what they're doing with him is not working, and so if he's one of the organization's top prospects and a potential key cog in the Yankees' plans to remain at the top of the Major League food chain while trying to cut payroll, he should be moved up to see what the Major League coaching staff can do with him.

Betances obviously isn't going to supplant anybody in the current Yankee rotation, but he can be a more useful bullpen piece than the likes of Cody Eppley or Freddy Garcia. The addition of Betances paired with the return of D-Rob would give the Yankees the boost in depth and talent that would allow them to dump the barely-used Garcia and get Betances around a group of people who could help him better than the Triple-A staff has. Mike Harkey has helped Robertson improve his command and cut down on his walks, and has had a knack for turning guys with far less raw skill than Betances into very good relief pitchers. Imagine what he could do with Betances. Larry Rothschild worked with Carlos Zambrano to improve his command in Chicago and has pushed the right buttons with Ivan Nova to raise his ceiling. And if you want to talk about improving command and repeating mechanics, who better to be exposed to than Mariano Rivera? He sure as hell doesn't have anything else to do right now, and there has to be a pointer or 2 he can try to pass on to Betances.

Beyond the internal plans for Betances in the here and now, there's also the trade market to consider. Betances could be just as useful to the Yankees as a major trade piece in the future, but his long list of MiL accolades won't mean anything to other teams for much longer if he continues to pitch as poorly as he is in Triple-A. Calling him up, getting him working with Harkey, Rothschild, and company, and getting him into Major League game action to showcase his stuff could do a lot to fix any damage that his ghastly early-season performance has done to his trade value.

I know talk of moving a young starter to the bullpen brings up a lot of bad memories in Yankeeland, but I'm not suggesting this as a permanent conversion to the bullpen. I'm suggesting it as a final effort to help Betances move closer to becoming the pitcher his skill set makes him capable of becoming, and as a way to do what the coaching staffs in the Minors have not been able to do. If working with the Major League coaching staff and veteran pitchers helps him and he shows something this season, then you bring him into Tampa early next year to start stretching back out as a starter and let him compete for a spot in the rotation. But the longer Betances toils away in Triple-A walking 6-7 guys a game in 4-5 innings of work, the less shiny a prospect he becomes and the less likely it becomes that he can be an asset to the Yankees in any capacity. Call him up and start molding him into something.
Posted by Unknown at 9:00 AM