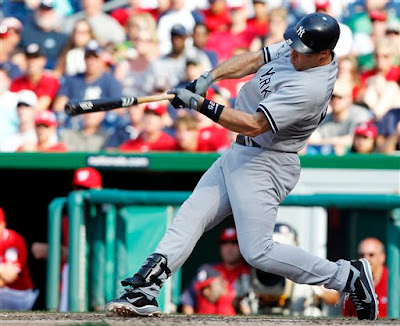 - Pettitte: 7 IP, 5 H, 2 ER, 3 BB, 6 K.  Again, not the greatest day on the hill for Andy, but he made pitches and got outs when he needed to in the later innings. And the fact that he was able to limit damage and work 7 innings became a blessing when the game went as long as it did and the bullpen had to be leaned on heavily.

- RISP Fail: Combined 2-18.  And the 2 hits were Jeter's and Teix's in the 14th inning.  If somebody could have gotten a hit here or there earlier in the game, it probably would have ended earlier.

9 in a row and a third straight series sweep are on the line tonight, as Ivan Nova takes the hill against former rumored Yankee FA target Edwin Jackson.  Nova has been on a hot streak lately, and the Yankees will be looking for that to continue to rest an overworked bullpen.
Posted by Unknown at 7:33 AM