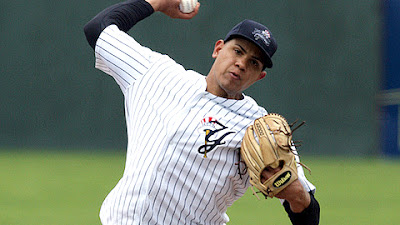 The only hitting name of significance going into the season was Zoilo Almonte, and after a strong showing from him in his short ST debut he had even more eyes on him.  Those eyes haven't been given much to look at so far this season, as Almonte has gotten off to a start, hitting .260/.296/.420.  His power numbers get him to a .325 wOBA, but Almonte does not seem to have made the adjustment to the Double-A level;  His K rate (31.5%) has gone up from last year, and his BB rate (5.6%) has gone down.

In Almonte's productivity absence, 2 under-the-radar names have carried the offensive torch for the Thunder.  Cody Johnson, an all-or-nothing lefty DH, has been more all this month, with 5 HR, a .559 SLG, and a .413 wOBA.  He's still striking out at an above 30% clip, and isn't considered a "real" prospect, but he's hitting well.  Also hitting well is Ronnier Mustelier, the 27-year-old utility man who just signed with the Yankees last year.  He's got a .355/.412/.526 slash line right now and has shown improved patience and selectivity at the plate.  As old as he is by MiL standards, there's no reason for the Yankees not to promote him quickly and see if he keeps hitting.

On the mound, the only shiny name is Brett Marshall and it's been an interesting start to his season.  He's had 3 pretty good starts, but one bad one has his ERA and FIP in the 4s.  He's also not striking very many batters out this year, just 12 in 20.2 IP, and his BB/9 of 3.92 is the highest it's ever been.  A bit of a step up on the stuff and the command would be an encouraging sign.  Even more encouraging would be seeing a healthy Graham Stoneburner.  He made one start early and has been back on the DL since.  In his absence, Craig Heyer and Shaeffer Hall have performed admirably to keep some rotation depth intact, but both are really just fringe prospects at best right now.

The position players on this roster who still qualify as prospects have had a rough start.  Austin Romine is still not back from his back injury that he suffered in spring, and I look more and more like a jackass for having faith and ranking him so high in the AB4AR Top 30.  Brandon Laird's shine continues to dwindle as well, as he is hitting just .232/.308/.328.  It's not as bad as his start to the 2011 season, but enough that he needs to do something big to get himself back on the map.

With the lack of production from the bigger names, the burden to carry the offense has fallen on some of the veteran members of the squad and they have responded positively.  Dewayne Wise finished up the last week of Spring Training strong and hasn't stopped hitting since the Triple-A season started.  He's got a .502 wOBA in 62 PA, and most surprisingly, has hit for a ton of power (4 HR, .707 SLG, .328 ISO).  Were it not for the Yankee pitching problems, Wise probably would have been called up when Brett Gardner went down.  Steve Pearce has also been raking, with a .378/.453/.554 line, .451 wOBA, and 9 XBH.

Worse than the performance from the major offensive prospects has been the performance of what was supposed to be a monster rotation.  David Phelps was called up to the show, and his absence has been felt even more thanks to rough starts for 3 of the remaining members.  Manny Banuelos' command problems continued in his first 2 outings of the season, both poor ones that resulted in 7 BB in just 5.1 IP and and 8.83 FIP, and he has been on the DL with back problems ever since.  Adam Warren has a 6.10 ERA/ 5.91 FIP and only 13 strikeouts in his 4 outings.  And Dellin Betances still does not appear to have made any advancements in his command or mechanics, walking 21 in 22.1 IP to 19 strikeouts.

The one bright spot has been D.J. Mitchell and his 3.13 ERA and 8.22 K/9 so far, but with the news of him being called up today, possibly to replace Freddy Garcia in the rotation, the onus will be on everybody else to start getting it together.  That goes double for ManBan, who needs to show that last season's command issues where a blip on the radar and not the start of a negative trend.
Posted by Unknown at 11:35 AM