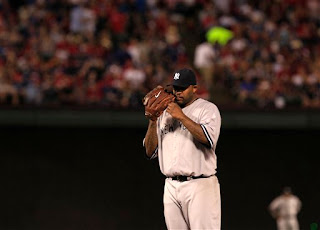 - Jeter: 4-5, 2B, 2 R, 1 RBI.  I don't remember reading much about Jeter's offseason workouts, but there must have been some time travel back to the early 2000s in there somewhere.

- Mark Teixeira: 0-4, 1 K, 4 LOB.  Had chances to drive in runs and couldn't come through tonight.  Not a big deal after the weekend he had.

There won't be a lot of work getting done in Japan today when Hiroki Kuroda takes the hill for the Yankees to face off against Yu Darvish in game 2 of this series.  To say I'm disappointed I won't be able to watch Darvish pitch is an understatement.
Posted by Unknown at 6:19 AM