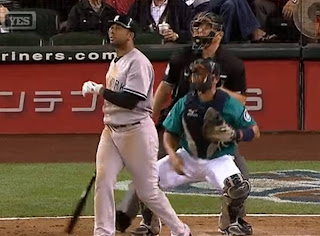 I already had Dickerson as a shoo-in for the postseason roster for the obvious strengths he brings as a late-game option, but if he can continue to swing the bat well, his role could expand.  And with Nick Swisher dealing with elbow issues, this last few weeks of the season would be a great opportunity for Joe to get Dickerson some more time as an everyday guy and see if he can be a consistent contributor.  With what he's already done in limited appearances this year, I think Dickerson has earned it.
Posted by Unknown at 11:51 AM