Red Sox Add Carl Crawford. This Is Me Not Caring 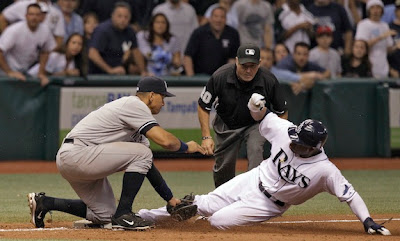 (Photo of Crawford getting thrown out at 3rd by Greg Golson courtesy of The AP)
According to multiple reports, the Red Sox signed Carl Crawford last night to a monster 7-year/$142 million deal, upgrading both their offense and defense in the process and vaulting themselves right back into contention as an AL East favorite, at least in the eyes of everybody at ESPN.  But my reaction when I read the stories this morning?  To borrow a line from the great Derrick Coleman, "Whoop-de-damn do."

Does Crawford really make the Red Sox THAT much better?  Yes he's an upgrade over Mike Cameron in the field and at the plate, and yes he completes Boston's replacement of Victor Martinez and Adrian Beltre's offensive production, but that's still just a replacement.  And for the money he's getting, money that makes him the highest paid outfielder ever in terms of total pure dollars, shouldn't the Red Sox be getting more than just a replacement?  Consider that Crawford has never hit more than 19 HR in a season, has never driven in more than 90, has never slugged above .495, has a career OPS of .781, and has only been above 4.4 WAR 3 times in his career.  Check his stats if you don't believe me.  Oh, and if you're wondering, almost all of Crawford's career highs were set last year in, that's right folks, A CONTRACT YEAR!!!!  Hmmmm...

Don't get me wrong, Crawford is a very good baseball player.  But he's not a $20+ million per year baseball player.  For that kind of money you should be getting Ken Griffey Jr. in his prime, Willie Mays in his prime, Barry Bonds in his prime (steroids or not), somebody who can play Gold Glove-caliber defense AND carry a team offensively by himself if need be.  Now in this Boston lineup, Crawford won't have to do that, but that doesn't change the fact that it's still the kind of production you should expect for that kind of investment.  And Crawford, quite frankly, is not that type of player.

And while we're on the subject of the Red Sox lineup, I take a look at it and still see a lineup that's not as deep or dangerous as that of the Yankees.  I'll take Swish, Grandy, and Gardner (the much cheaper, homeless man's Carl Crawford) over Crawford, Ellsbury, and a rapidly-declining J.D. Drew any day of the week.  The right side infield combo of Teix and Cano should outproduce the combination of Gonzalez and Pedroia no matter how much better Gonzo's numbers get thanks to playing in Fenway, ditto for the left side combo of Jeter and A-Rod compared to Scutaro and Youkilis.  The catching trio of Jesus, Frankie, and Jorge (assuming he gets a little time behind the plate) will be better than the garbage combo of Saltalamacchia and Varitek even on their worst day.  And let's not forget that David Ortiz was getting ready to be thrown on the scrap heap after April this season.  In 2011 he's going to be another year older and that that bat will be another year slower.  Any way you try to cut it, the Yankee lineup is still at least a little bit better top to bottom than Boston's with the potential to be a lot better if Grandy plays like he did in the 2010 postseason and Jesus has a quick learning curve.  So if Crawford didn't help put the lineup over the top, how can you justify making him the highest paid OF ever?

Basically, what happened here was the Red Sox got spooked by the reports of the Yankees having "serious" talks with Crawford and scrambled to make him an offer much bigger than what they probably should have, knowing it had to be more than the ridiculous contract the Nationals gave to Jayson Werth.  I'm sure they've been doing their damnedest to do the same thing to the Yanks with Cliff Lee, but in reality they were never major players for Lee, knew they weren't, and instead overspent on their other big target that they did have a shot at.

The Yankees were going to make Lee a monster offer regardless of what the Red Sox or anybody else did.  The Sox probably weren't going to do the same for Crawford, especially after the Gonzalez trade/re-sign, but started feeling the heat of all the Yankee-Crawford rumors and did what they thought they had to do to keep up.  Now they've spent their money and they still have a lineup not as good as that of New York and they're about to watch the Yankees improve their rotation to the point where it can also be considered better than Boston's.  So at the end of the day, this Crawford signing doesn't mean anything to me and it shouldn't mean anything to you.

(P.S.- $142 mil for Crawford and $150-160 mil coming for Gonzalez?  I think we can end all this "the Yankees spend too much, we're still just a scrappy underdog" bullshit coming from Boston once and for all)
Posted by Unknown at 9:27 AM