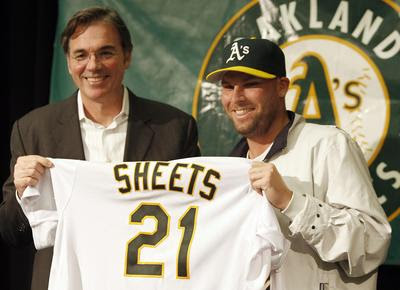 P.S.- It's obvious that Sheets' stuff isn't half of what is used to be, but at least I got the "Sheets does pose a big question mark" part right.  Sort of.
Posted by Unknown at 7:50 PM

Yeah, pitchers who are constantly injured should probably just be avoided as much as possible. You just can't count on them. Giving a guy who has just undergone Tommy John surgery for the first time in his life a cheap contract or a two year deal is one thing, but guys like Sheets and Harden should just be avoided altogether. Health is underrated in baseball.

I agree completely. And I'm normally a lot better about knowing that. I openly admitted that I knew Sheets was a walking DL-stint and I still thought he was a good idea. I don't know what I was thinking. I'm just glad he's not doing what he's doing in a Yankee uniform right now.

That must have been an out-of-body experience when I was writing that post. That's the only explanation that makes sense.