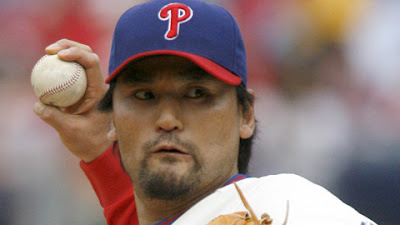 The big Yankee news of the day is the all-but-done signing of Chan Ho Park to a one-year, $1.2 million deal with an extra 300k for incentives. This move by Cash, in addition to creating a logjam in what was already going to be a crowded bullpen competition, puts the Yankees over their self-imposed payroll budget for 2010. While I can't say I approve of the Yanks brass reneging on their commitment to a hardline on the budget this soon in the season, I can say with confidence that if you're going to go back on your word and break the bank for more pitching, what better guy to do it for than Chan Ho Park.

I mean, just look at those numbers from last year: 4.43 ERA, 1.40 WHIP in 83.1 innings pitched, less than a strikeout per inning. If those numbers don't scream "WE HAVE TO HAVE THIS GUY ON OUR TEAM!!!!", then I don't know what does. Not to mention the guys' past track record of success with all his former teams and the heaps of awards and accolades he has accumulated in his decorated career. At this point, the Bombers can pretty much call the Joba-Hughes battle off, because with Chan Ho Motherfucking Park about to join the team, the 5th spot in the rotation AND the setup role out of the bullpen is locked down like Fort Knox.

In all seriousness, I don't think this is a bad move by the Yankees; Park's numbers were much better out of the bullpen with the Phillies last year: 2.52 ERA, 1.18 WHIP, 52 K's in 50.0 IP, .231 BA against, and a bunch of other meaningful stats that other blogs can come up with faster than I can. And his stuff was also much better: consistently throwing 95-96 with the fastball, better command and movement on his off-speed stuff. In following with Cash's theory of "you can never have enough" relievers, this looks like a good move.

But there are also some points to consider that make this a potentially bad, and even unnecessary move by the Yanks. For starters, Park has no track record of success to speak of up until last year, when his transition to the 'pen only took place as a result of him being incredibly awful as a starter. His short sample size of success did come in a weaker league playing primarily in an offensively-challenged division (not too much to be scared about in the 2009 Braves, Mets, and Nationals rosters), which raises the concern that the Yankees fell in love with him because of his sterling 3.1 innings of shutout ball he pitched against them in the World Series (a path they have been down before with little success). How well Park would be able to re-create that success in the AL East is a big question mark. Also, Park's arrival means that somebody currently on the roster has to be the odd man out.

The bullpen positions that are set as of today are Mo, either Joba or Hughes, Marte, Robertson, and Aceves, with the last 2 spots likely coming from the group of Gaudin/Logan/Mitre/Melancon/Albaladejo. With the deal he signed it seems highly unlikely that Park is going to play in Scranton, so you pencil him into the 6th spot in the 'pen and now the fight between those other 5 is down to one. The early leaders would have to be Gaudin, Logan, and Melancon, but with his high salary and management's desire to stay at or under their budget, Gaudin seems the most likely to not only lose his spot in the 'pen, but to be packing his bags and cleaning out his locker to make room for Park.

Personally, I think Gaudin has more value than Park as he has shown the ability to be effective in both a reliever and starting role, something that will be important this year if the Yankees have to get creative at the back end of their rotation either due to Hughes' innings limitations, Joba's ineffectiveness, or (knock on wood) due to injuries. I also would have liked to see Melancon get another shot this year since the team has spent the better part of the last 3 years grooming him to be an impact reliever. Give him a chance to correct the control issues he had in his cup of coffee last season and he could become a lights-out, high-strikeout, late-inning stopper similar to 2007 Joba or 2009 Dave Robertson.

The feeling across the Yankee blogosphere is that this is a low-risk, high-reward move by the Yankees and helps bolster their bullpen depth for the upcoming season. At the end of the day, you can't argue with the logic of adding a proven bullpen commodity to the mix and on paper, that's what the Yankees have done. While I agree with that assessment, I hope it doesn't come at the expense of moving Gaudin and his $2.95 million salary because that could severely hurt the Yankees' starting pitching depth if issues in the rotation arise.
Posted by Unknown at 12:36 PM