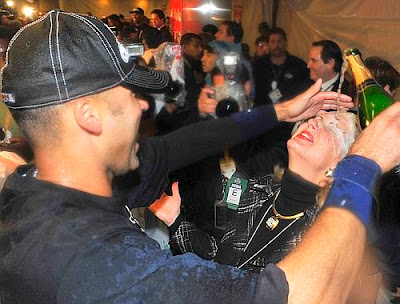 * Beyond just winning the series, Andy's performance last night allowed the Yankees to keep their rotation intact for the World Series, namely starting CC in Game 1.  The one less off-day in the Series schedule means the Yankees will most likely have to use Chad Gaudin as the Game 4 starter, but by not having the ALCS go to a Game 7, they still have the option, albeit an unappetizing one, of using 3 starters and guaranteeing Sabathia pitches 3 times.

* While guys like Damon and Melky hit much better in this series, the offense is still pretty much Jeter & A-Rod and hope for the best.  Teix still hasn't put it together, Jorge is hot-and-cold, Cano isn't locked in, Matsui looks old, and Swish is just about useless.  Logic would dictate the Yankees will hit better next series against pitching that is no better than what the Angels offered, but don't forget the Yankees won't have the luxury of the DH for 3 of the 7 games.  That fact makes it all the more important that guys like Teix and Cano get it together to strengthen up what will be a thinner middle of the lineup when the series shifts to Philly.

* Who the hell was that old bag who was serving as the Honorary American League President?  And more importantly, why is there a fucking Honoray American League President??  How did she get to that position?  Do you have to apply for it?  What's the age and experience requirements?  Was it some sort of MLB promotional program?  This is the kind of shit that Ken Rosenthal needs to be reporting on.


* And speaking of that lifeless suit, are Ken Rosenthal and the FOX NFL Robot the same thing?  They're both equally useless and annoying and add nothing to FOX's broadcast of baseball or football.  Not to mention that Rosenthal delivers his reports that are always either already known by everybody watching the game or were newsworthy 3 weeks ago in his monotone, over-rehearsed voice, a voice that one could call...robotic.  I'm not one for conspiracy theories, but I'm just sayin'.  If you still aren't convinced, here's a visual comparison... 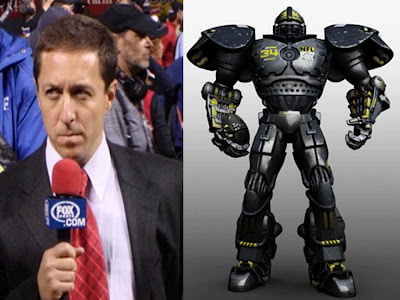 * I'm not going to argue CC as the ALCS MVP pick.  The guy was brilliant in both of his outings, rendering the Angels' offense a non-factor, the struggling Yankee bullpen an even bigger non-factor, and giving the Yankee offense time to find itself.  But the argument could certainly be made for A-Rod.  Check the stat line:

.429 avg., 3 HR, 6 RBI, 6 R, 8 BB, 20TB, and an absolutely insane 1.519 OPS.  And that doesn't even factor in the flawless play in the field, smart, agressive baserunning, and the little communications with his teammates that helped set up some run-scoring opportunities in the series.

There's no denying the guy has been head and shoulders above his peers right now.  He's doing everything right and doesn't show any signs of slowing down.  He's had very few bad at-bats and looks smoother in the field than he ever has.  Making an out no longer seems to bother him, and he's more willing to let his teammates pick up the slack.  You can pretty much throw all his past failures out the window with the way he's played so far.  It will be interesting to see how the Phillies approach A-Rod, especially in the games at their place, but my money would be on A-Rod continuing this blazing hot streak if Philly chooses to pitch to him.