5 Reasons Why This Weekend's Series Matters 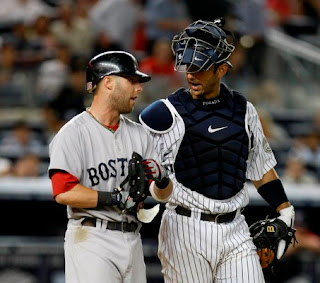 The team has basically been on cruise control since their last series against Boston so this will be a good test of where their collective mindsets are at as they head toward the finish line of the regular season. Playing in a playoff-like atmosphere for 3 games will be a good indicator of just how well this new team can handle the pressure of playing playoff baseball as a Yankee, something that the last few Yankee playoff teams could not handle. The ability to get clutch hits and clutch outs was what dogged the 2004, 2005, 2006, and 2007 Yankees and while this year's team has reversed that trend, they still haven't shown they can do it on the biggest stage.

Let's be real here, Joba is hanging on by a thread to his chances of being used as a 4th starter in the playoffs. Nothing he can do in the last 2 series is going to be more influential to Joe's decision than tonight's game. Don't forget, if the Yankees sweep this series, they clinch the division, so you know they'll be playing to win. As much as everybody wants to see him do well, I can't imagine Joe leaving Joba out there tonight to stretch him to 4, 5, or 6 innings if he sucks again at the expense of winning the game. And if Joba does suck again, I would give a serious look at Chad Gaudin as my 4th starter before I considered Joba.

So Andy's shoulder didn't bother him after his last start, big fucking deal. I don't even I could have told you his shoulder wasn't going to bother him because he had a ton of extra rest for it. That's like saying it's a groundbreaking discovery that eating more fruits and vegatables is going to help your overall health. The important thing is not to see if more rest helps his shoulder, but whether or not his shoulder can remain strong on regular rest, because that's all he's going to get in the playoffs. You can't afford to skip a start in the postseason rotation and risk throwing Sergio Mitre or Joba out there in a must-win situation, so how Andy and his shoulder feel after Sunday is a much bigger deal than him feeling better after a week off.

I know I'm a Yankee fan and so my opinion is a little jaded, but is there any doubt the Yankees have the better bullpen than Boston? The New York 'pen has been more consistent and come up bigger in bigger spots more times than Boston's this season, especially in close games. Most of Boston's main bullpen guys are all or nothing and none of them have looked particularly great lately: Ramon Ramirez, Manny Delcarmen, Hideki Okajima, and Daniel Bard, who was absolutely raped by New York the last time he faced them. None of those guys have been lights out or even half of that lately, and Papelbon is never a sure thing. Putting 2 guys on might work against Baltimore and Oakland, but when you're facing the Yankees' lineup, you're always one swing away from losing the lead.

Plus, with Aceves, Joba, and Gaudin out there, they Yankees are far more well-equipped to handle long-relief situations if a starter bombs than Boston, whose bullpen is basically a collection of 1-inning guys, 2 tops. If Dave Robertson is good to go then the advantage in consistency and versatility has to go to New York, but this series will provide some insight on which guys on which teams can get 1, 2, or 3 outs in a clutch situation.

With the mad dash to pick up late-season games, tonight's opening game will be on TBS and ESPN has the Sunday afternoon affair, which means we get to see who Chip Caray and Buck Martinez and Jon Miller, Joe Morgan, and Steve Phillips are rooting for, and thus get a clue as to what the spin will be as both of these teams move into the playoffs and possibly to a meeting in the ALCS.

The Leader in Hype's allegiance is still blatantly to Boston. The SportsCenter and Baseball Tonight coverage of each Yankee game vs. Red Sox game over the last month has been laughably prejudiced to the point where an uneducated person would assume that Boston was nipping at New York's heels for the division lead, if not actually in the lead of the division themselves. The one shining beacon of objectivity has been Joe Morgan, who at least attempts to give the Yankees their due. The real wild card in the ESPN stable is Phillips. As much of a bumbling idiot as he is, he always likes to be associated with the flavor of the month so don't be surprised if he jumps ship to the SS Yankee if New York dominates this weekend's series.

One thing is for certain, though, and that is that Joe Buck and Tim McCarver will continue to be the biggest Red Sox fans this side of Ben Affleck, so hopefully Caray and Martinez are smart enough to side with New York and give a good balance of announcer favoritism for the playoffs.
Posted by Unknown at 2:54 PM