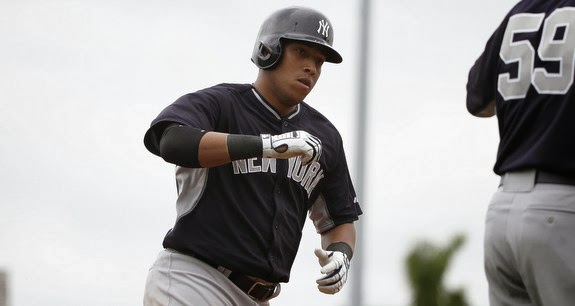 Yangervis Solarte- The runaway favorite right now for the annual "guy who comes out of nowhere to have a monster ST and get people excited about his roster chances" award, Solarte has arguably been the best position player through he first 9 games.  He's played in 6 of them, he leads the team with 13 plate appearances, he's hitting .667/.692/1.167 with 2 HR and 6 RBI, and he's played 4 different positions in the field.  The Yanks could use some versatility and hitting on their bench and so far Solarte has showed them a lot of both.

Dellin Betances- He was one of the first pitchers to start throwing when camp opened and that head start on the rest of the bullpen field has served him well.  Betances is tied for the lead in appearances early on with 3 and he currently leads all pitchers with 5.1 IP in those appearances.  He's yet to allow a run, he's only given up 1 hit and 2 BB, and he's struck out 4, so the early returns are exactly what the Yankees were looking for from him.  If the Opening Day roster was picked today, he'd be in the bullpen for sure.

Francisco Cervelli- The chances of Romine or Murphy stealing the backup catcher job from him were slim, but they were still there.  The way he's played to start his spring camp, I'd say those chances are all but gone already.  Cervelli's gone 5-9 with 2 XBH in 4 games and has spent more time catching Masahiro Tanaka than any other catcher, leading Mike Axisa to speculate that he could become Tanaka's personal catcher once the regular season starts.  That wouldn't be a bad job to have.

Derek Jeter- While the results at the plate haven't been there through his first 4 games (0-9, 8 GBs, 3 GIDPs, 1 BB, 1 K), the health in his legs has been.  When you're staring down the barrel of 40 and coming back from a year and a half of leg problems, that's all that matters this early in camp.  Jeter hasn't appeared hindered in the field and has looked good running down the first base line.  He's also already played in back-to-back games to start testing his legs and his endurance for the long haul.  With 3 more weeks to get his timing back at the plate, all appears well.

Robert Coello- As good as Betances has been in his 3 appearances, that's how bad Coello has been.  He pitched a perfect inning against the Nationals on Monday, but in his other 2 outings he's recorded 2 total outs and given up 9 ER on 8 hits (3 HR).  The location hasn't been there, the nastiness on his forkball hasn't been there, and he's been getting shelled by less-than-Major League hitting competition.  Not the kind of start you want when you're already a fringe bullpen contender at best.

Chase Whitley- Speaking of fringe bullpen contenders, Whitley hasn't done much to help his case in his 3 outings.  6 ER on 6 H and 3 BB in 3.0 IP is hardly the type of performance that gets you noticed and he's more than likely already sealed his fate for a return to middle relief work in SWB.  As the Major League regulars build up their pitch counts and starting taking more innings, his chances to redeem himself are going to go away.

Corban Joseph- Even though he's been removed from the 40-man roster, Joe has treated CoJo like a real candidate for a bench spot.  He's given him plenty of reps and put him in the lineup at multiple positions.  Joseph hasn't responded to the opportunity yet, going 2-11 at the plate with 2 BB and 3 K and making 2 errors in the field.  His lack of defensive flexibility cost him his shot to stick on the bench last season and it could hurt him again this year.

Dean Anna- This may be a little bit of a stretch.  Anna hasn't been bad by any means through the first 9 games.  He's played in 6 of them, gotten to show what he can do at a couple different infield positions, and he's gotten his hacks with 12 PA.  He just hasn't done anything memorable in any of those chances.  He's hit 3 singles, hasn't scored a run, has struck out 5 times, and from what I've read he hasn't really dazzled at any of the infield spots.  With Scott Sizemore getting into games now and Eduardo Nunez off to a hot start, Anna needs to pick it up to stay in the race for utility infielder.
Posted by Unknown at 12:30 PM