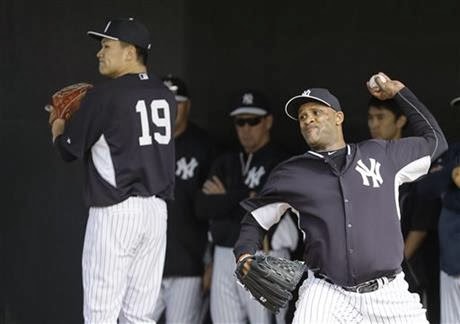 
The elder statesmen, CC and Hirok, remain at the top of the rotation and they're both looking to prove something.  Sabathia's trying to prove that last year was a blip on the radar and not the start of a long decline, and he's already on the right path to doing so.  He's leaner and reportedly stronger than he was last season, he got a regular offseason throwing program in, and he said he spent time working on adjusting his mechanics to pitch effectively with less weight on him.  Everybody knows that Kuroda can still get it done, but at 39 he's looking to get it done over the course of a full season.  Neither of these guys are going to blow anybody away, but they're both smart veteran pitchers with a variety of plus offspeed offerings who know how to pitch in Yankee Stadium and the AL East.  As long as they're able to command their fastballs, they're a solid if not slightly underrated 1-2.

The 3-spot is where we find the new guy in town, and as expected he's already drawing a huge crowd and huge media buzz with everything he does and says.  Masahiro Tanaka, the 25-year-old righty ace from Japan, was signed last month to a mammoth 7-year/$155 million deal, $175 mil when you factor in the posting fee.  He's been the best non-MLB pitcher in baseball for the last few years and the Yankees scouted the hell out of him before landing him.  They, like many others, loved what they saw.  Tanaka has good size, a smooth delivery, and an array of plus pitches that include 4- and 2-seam fastballs that he can run up into the mid-90s, a tight slider, and a splitter that's been described as one of the best in the world by some scouts.  The Yankees are attempting to temper expectations for him by plugging him into the 3rd spot, but if Tanaka can adapt well to the differences between the NPB and MLB games, he's got the makeup to be one of the best pitchers in the AL.

Tanaka's arrival bumps Nova down the 4-spot this year, where he could be the determining factor for how good this rotation is.  Nova made another adjustment to his game in a short Triple-A stint last year and it led to the longest stretch of success we've seen from him since he came up.  His curveball is unhittable when he's commanding it, he's improved his fastball command, and he's still working into his prime at age 27.  A repeat of last year's second half over a full 32-start slate should make him easily the best 4th starter in baseball, a potential Robin to Tanaka's Batman in that new era of Yankee starting pitching, and it will take a lot of pressure off whoever wins the competition for that 5th spot.  I think behind closed doors the Yankees decision makers want that to be Michael Pineda, but David Phelps could end up with the job based on more recent experience.  Either way, the Yanks are in better shape at the back end than they were with Hughes around and they've got the potential to be above-average at every spot in the rotation if Pineda can regain his 2011 form.

The potential for this year's rotation is very high if everything clicks.  If CC can do what Andy and Moose did before him and adjust to life without big velocity, he can still carve hitters up with his slider and changeup.  If Kuroda is managed more carefully early in the year, he could have more left in the tank for August and September.  If the changes in work schedule, ball size, hitter quality, and game strategy don't negatively impact Tanaka, he's got a chance to be an ace.  It's a lot of "ifs" for sure, but even if they don't all pan out positively the floor for this group is still respectably high.  The top 4 are all capable of going out and throwing complete game shutouts when they're on, they're all good at generating groundballs, and they all know how to battle and get through 5-6 innings on days where they don't have their A-game.  There shouldn't be much concern about 2-inning disaster outings or using tandem starters this year and that'll be a nice change of pace.

While the main focus was improving the offense, the Yankees made sure to upgrade their rotation as well this offseason and they did it while getting younger in the process.  They aren't on the level of the Tigers or the Cardinals, but overall the Yankee rotation looks to be in the best shape it's been in years.  It's got size, it's got stuff, it's got experience, it's got youth, and it's got depth.  If there's one part of the roster to get excited about in 2014, it's this one.
Posted by Unknown at 10:30 AM