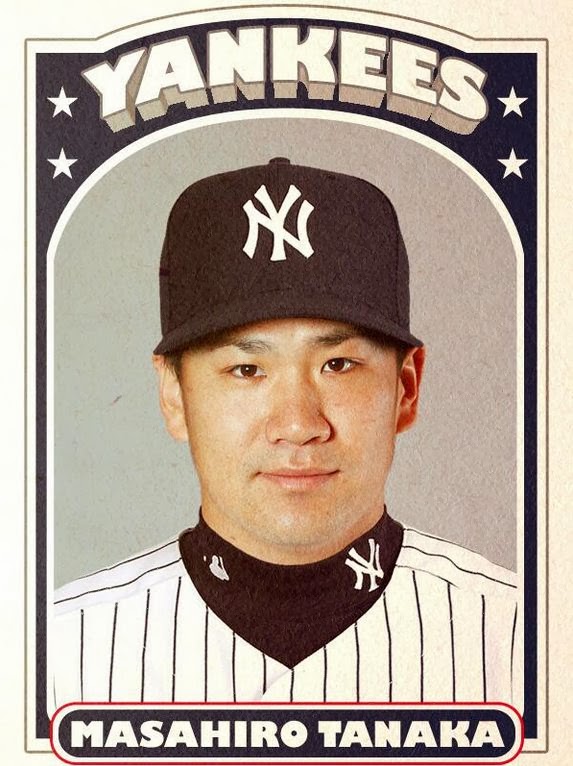 After the Tanaka signing, the whole story changed.  Now Sabathia could be looking at a bounce back year after having a normal offseason throwing program to work on his mechanics and getting into even better shape.  Kuroda is a reliable, steadying veteran arm who can pitch like a #1 when needed, a #2 most of the time, and could be almost undervalued as a #3 if Tanaka is the real deal.  Nova is a 27-year-old who looks like he's finally starting to put it together, and Pineda could be an absolute steal as the 5th starter if his stuff comes back to something close to his old form.  From not being able to compete in the AL East to potentially one of the best rotations in baseball, all thanks to 1 man who's still never thrown a single MLB pitch.

The best part about the near 180 in perception of the Yankee rotation now is there's legitimacy to all of it.  Sabathia is looking much fitter and trimmer than he ever has, and according to him it's not so much that he dropped weight but that he actually worked to tone and tighten up his body.  That should help lessen stress on his elbow, shoulder, and leg joints, allow him to maintain his release point better, and help him better maintain his stamina and fastball velocity through his starts next season.  For all the talk about his 2nd half shortcomings, Kuroda really wasn't that bad last year and has been the most reliable starter in the rotation since becoming a Yankee.  Nova looks like he's figured something out with his new 4-seamer/2-seamer curveball approach and if he can stick to that this season he should outperform his very modest projections.  And Pineda, for all the justified concern about his shoulder, is still just 25 years old and still presumably has the potential to be the pitcher he was in 2011 when he was striking out over a batter an inning.

Then there's Tanaka, the key to the whole perception makeover.  His pitch repertoire and makeup makes him look like he could be Kuroda 2.0, and multiple scouts have compared his ceiling to that of Dan Haren in his prime.  You know, the Dan Haren who led all starters in starts, was 2nd in IP, and 3rd in fWAR from 2005-2011 before his back started acting up.  The Yankees certainly could have used Dan Haren in his prime in those years and they need a pitcher like that even more now.  If Tanaka can come close to replicating that, he's a gargantuan boost to the top of this rotation.

And even if he doesn't, it's not like the rotation will go back to being lost at sea like they were being portrayed earlier.  Consider this tweet:

#Yankees' rotation is projected to have a 15.2 fWAR (FanGraphs' depth charts), third-best in baseball...without Tanaka.
— Beyond the Box Score (@BtBScore) January 22, 2014


Bet there weren't too many out there who knew that but it's a statistical fact.  The point here is the Yankee rotation was never in quite as bad a shape as it was being made out to be and now it should get a whole lot better.  They had to pay through the nose to make it happen, but that's what it was going to take once the new posting rules were put into effect.  The high dollar amount paid to secure Tanaka was a byproduct of MLB changing the system, not the Yankees "trying to buy a championship" or whatever other tired excuses the sour grapes fans of other teams who didn't get Tanaka want to use.  Now they're equipped with 5 starters who, at the very least, are capable of going out and giving you 5-6 innings on their worst day and flat out shutting the opposing lineup down on their best.  There aren't too many other teams out there who can say that and there aren't going to be too many people still saying the Yankees can't compete this year.
Posted by Unknown at 10:30 AM