Where Does Zoilo Fit In Now? 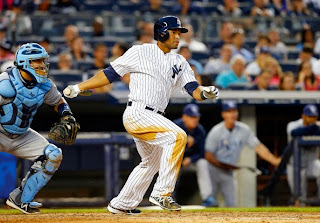 A hamstring injury ended his season early, but he's picked it up back in the Dominican Winter League this offseason.  If you haven't been following the comings and goings of that league closely, and I don't blame you if you haven't, Zoilo has hit .316/.343/.454 out there and has seen time at all 3 outfield positions.  What does that mean as far as his Major League standing for 2014 goes?  Probably not much.  Almonte has hit in this league before, and with the new acquisitions made by the Yankees to upgrade their outfield it's not a stretch to say he's the 7th outfielder on the 40-man right now behind Ellsbury, Beltran, Gardner, Soriano, Ichiro, and Wells.


As horrible as Ichiro and Wells were in 2013, it'd be nice to see the Yankees jettison them and maybe give Zoilo a shot as the 13th position player on the bench  next season.  His switch hitting and defensive flexibility basically make him a combination of those 2 below-average players, and some more high-level experience under his belt could help improve his Major League production.

Recent happenings suggest that isn't going to happen anytime soon, however.  The Yankees inexplicably DFA'd Brett Marshall to clear a 40-man spot for Beltran so they could hold onto Wells and his ... his ... his whatever they still value in his game.  And with Masahiro Tanaka finally being posted, the Yanks could kill their attempts to move Ichiro and keep him around as a way to entice Tanaka to sign with the Yankees and help him make the transition to the US and MLB life in the Big Apple.

That puts Almonte in a tough spot, and he'll likely land back in Triple-A to start the season with Slade Heathcott and Adonis Garcia in the outfield.  But with the crop of top prospects behind him in Double-A, he can't afford to repeat what Marshall did in 2013 and have a down year.  With as much organizational depth as the Yankees have in the outfield right now, a bad season could see him being the one jettisoned to clear roster space if and when it's needed.
Posted by Unknown at 9:30 AM

Wouldn't you have to think that the Yanks are going to hold on to Zoilo since they only have 2 OF's locked up for 2015 (Ellsbury + Beltran), and the OF free agents next year are pretty terrible, unless they are planning to extend/resign Gardner (who may look elsewhere for a CF gig)?

I'd like to think they're going to. I hope they do. But even that isn't a great strategy if he's just going to spend most or all of 2014 in Triple-A.

If they still see him as part of the future in some capacity, they need to see if he can play at the Major League level. 113 PA is not nearly enough of a sample to make that call.