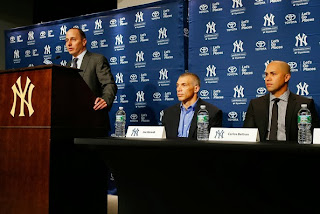 Now that he's posted, it's time for the Yankees to add the second half of that 400 innings by being aggressive and winning the negotiating contest with Tanaka.  The reasons for them needing to do so really don't need to be reviewed anymore at this point.  All that matters is that the Yankees have been the odds on favorite to land Tanaka since before the offseason started, and that advantage has seemingly grown with the announcement that Casey Close is representing Tanaka.  They've put too much time and effort into scouting Tanaka and positioning themselves to sign him to not finish the job, and no disrespect to David Phelps, but I'd feel much better about him being the team's 6th starter next year than I would about him being the 4th or 5th.

Don't think I can stress this enough, the Yankees need to sign this guy.  They need to get younger, deeper, and better in the rotation.  It's the biggest area of weakness on the roster right now.  Tanaka should help make all 3 of those things happen.

If the decision on the A-Rod appeal comes down early next month as it's expected to, that will go a long way in clearing this one up.  Personally I'd love it if the entire suspension got dropped and Alex himself was the main part of the plan at the hot corner next year.  Sadly, I don't expect that will be the case, not with the way everything has already gone down.  There isn't much left on the free agent market that piques anybody's interest and the Yankees don't seem to be in a rush to get a deal done with Mark Reynolds, but maybe there is something in the works with Stephen Drew depending on how long A-Rod's suspension ends up being.  That wouldn't be a bad option, and even a Reynolds/Kelly Johnson platoon there wouldn't be the end of the world.  As long as Eduardo Nunez doesn't factor in, I'm OK with pretty much anything the Yanks do to address the position as long as they do something.

Joe will say he isn't going to start thinking about this until spring camp and he'll also say he won't make a final decision until the end of camp, but you have to think he's got some ideas floating around in his head about how he'd like to use all his new pieces next season and where he sees them fitting into a lineup card.  He's got a lot more speed to work with, more power than he had at the start of this past season, and a handful of switch hitters.  How will he decide to split them up?  Who will hit second behind Ellsbury?  Where does Teix hit now?  How will he shuffle things when Jeter is on a DH day and Brendan Ryan is playing shortstop?  There are so many new faces that it would be to Joe's benefit to start defining some roles now, at least in his head.

5) Figure Out The Bullpen Situation

With Tanaka in play, third base still needing attention, and a lot of the big FA names off the board, it seems less and less likely that the Yankees will go out and sign a top flight reliever to compete with D-Rob for the closer role next year.  At the moment it doesn't even seem likely that they'll sign any "proven" reliever to soak up some of those lost innings, even though I'd love for them to ink Jesse Crain to a 1-year for no other reason than to allow me to say I got 1 Project 189 pick right.  What seems more likely is a piecing together of the 'pen through smaller, scrap heap signings and internal guys before the start of Spring Training, which isn't ideal but is a method that's worked for them in the past.
Posted by Unknown at 11:00 AM