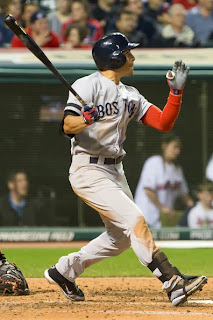 
- Putting the contract aside and just looking at Ellsbury the player, there's a lot to like.  What he doesn't offer in consistent left-handed power he makes up for almost everywhere else.  He hits for average (.297 career BA), he gets on base at a decent clip (.350 career OBP), he steals a ton of bases and scores runs when he gets on, and he's a tremendous defensive player by any measurement.  At worst, Ellsbury is a 3-tool player with the potential to be a 3.5 if his power plays up in YS3, and his outfield arm, while not great, isn't embarrassingly bad.

- As a player, Ellsbury is basically Brett Gardner on steroids (figuratively).  He's the type of leadoff hitter and center fielder the Yankees wished Brett Gardner could be but know he never will be.  Compared to his other FA outfield counterparts, he's the youngest, fastest, and probably the most likely to age gracefully into his late 30s.  It sounds like Beltran is going to get that 3rd year from KC that New York didn't want to give him and there's a lot of competition out there for Choo, so the Yanks made the call to snap up the next available guy who happens to have the most tools.  I can support that logic.

- About the power, I think hitting towards the short porch in YS3 will help boost his HR numbers over 10 a season but I don't think he's going to end up hitting 20 a year or anything like that.  The 32 homers in 2011 looks like a major statistical anomaly, not a true representation of what Ellsbury's power potential is.  If he maintains his high batting average, steals a lot of bases, and scores 100+ runs a year, I can live with 12-15 HR.

- So Ellsbury becomes the new leadoff hitter, the new center fielder, and Gardner gets moved back to left field where he generated more defensive value than he did in center.  Regardless of what happens in right, the Yankees are once again improved in the area of outfield defense.  If the plan is to play Ichiro in right and use Soriano primarily as a DH, they'll be even better.

- I do want to know where this puts Gardner and Ichiro in the batting order.  Will Joe double up with speed at the top and go Ellsbury, Gardner?  Where does that put Jeter if he does that?  Do Ichiro and Gardner get bumped all the way down to the 8-9 spots so Jeter can keep hitting in the 2-hole?  I can't quite put my lineup together right now without knowing who's playing third base and who's starting in right field.

- Now about the contract, I'm not crazy about 7 years for Ellsbury, and really not crazy about the 8th year option and full no-trade clause.  I would have preferred 5 or 6, but when Scott Boras set the line with the Carl Crawford comparisons you knew that wasn't going to happen.  MLBTR predicted 7/$150 mil, so at the end of the day the Yankees really didn't overpay as much as some people want you to think.  As the 2nd best free agent on the market, Ellsbury was going to get that kind of deal one way or another.

- As for what it means for the rest of the offseason strategy, I don't think it changes anything.  The Yankees are still going to try to sign Robinson Cano and they should.  They're still going to go after starting pitching and they should.  I have my theory about how this move could be connected to the Cano situation, but I don't think it does anything to lessen the need or the desire to re-sign Cano.  Spending a big chunk of money to fill 1 hole doesn't make the other holes off limits, no matter what the reality of the payroll budget might be.

- To that point, I will say that I think this signing is a strong indicator that Operation 189 is going out the window.  The Yankees still have enough right now to re-sign Cano and stay under, but they would do only be able to do that if they didn't go hard after starting pitching and I don't see that happening.  You don't make a $15 million offer to Hiroki Kuroda and then just pull it back to save money and go with Adam Warren.  The Yankees want Kuroda and I don't expect that to change, nor do I expect them to alter their course on Masahiro Tanaka.  It will be impossible to sign all 3 of them and stay under $189 million, but I'd rather have all 3 and go over then miss out on 1 to stay under.

- Can you imagine that?  An offseason haul of Cano, McCann, Ellsbury, Kuroda, and Tanaka?  That's 3 of the top 4 available position players and 2 of the 4-5 top starting pitchers.  That kind of big spending for that kind of top-tier talent almost makes 2008 look like child's play.

- I briefly touched on it earlier today with the Ichiro suggestion, but based on what happened to ease the catching logjam after McCann signed it wouldn't shock me to see the Yanks try to move one of their extra OFers.  Maybe Ichiro if anybody likes him, maybe Gardner.  No matter what the team says, I don't think you can rule anything out right now.

- An even more interesting trade option than those 2 might be the top outfield prospects.  Both Slade Heathcott and Mason Williams project as Major League center fielders but they won't be getting that job in New York anytime soon with Ellsbury around.  Suddenly they've become much more valuable as trade pieces, trade pieces that other teams could actually want.  Maybe a package including one or both of these guys, a young pitcher, and another prospect for some starting pitching?  Like I said, don't rule it out.

- It was inevitable, but all the anti-Ellsbury rancor coming from Fraud Sawx Nation is comical.  Like, did you guys really expect Ellsbury to take a hometown discount to stay?  He's had Scott Boras as his agent from day 1, that's all you need to know.  Ellsbury was always looking to get paid and he and his agent know which team pays the most.  That's what free agency is all about.  You had the guy for the start of his prime, he just helped you win another title, be thankful for it and let him do his thing.  Has the shine from that championship trophy already worn off to the point that you need to start bitching about the Yankees again?  Grow up, Boston.

- Gee, I wonder if the Yankees will let Ellsbury wear number 2 now that he's on their team.  Oh wait...

- Lastly, a word on Ellsbury's health concerns.  I know a lot of people don't like the deal because he's missed big chunks of time due to injury in the past and they think he's going to start breaking down.  That was part of my initial thought process too.  That's always a concern with players signed to long-term deals, but let's be fair when evaluating Ellsbury under that microscope.  He busted up his ribcage in 2010 colliding with Adrian Beltre trying to catch a pop up.  He banged up his shoulder in 2012 when he tried to slide under Reid Brignac and Brignac fell on him.  Those were 2 freak plays that could have happened to anybody.  It's not like he has a long history of muscle strains and knee surgeries and stuff like that.  He's not injury-prone.  He's gotten injured twice on account of really shitty luck.  Sometimes that's how it goes and it's important to keep that injury history in the proper perspective.

I still would have preferred Choo and I'm not fully on board with the signing yet.  Call it like 70/30 on board.  But as with McCann, the Yankees are adding another top player at his position and in the process they're strengthening one of their biggest roster weaknesses.  Ellsbury has averaged over 5.2 fWAR per full season when he's been healthy.  He's really, really good.  If he can avoid more bad injury luck, pump out another handful of 5-WAR seasons, and retain some value with speed and defense at the end of the deal, this could go down as a very good signing.
Posted by Unknown at 2:00 PM