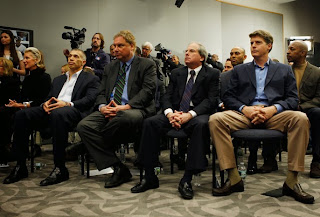 - "Hal Steinbrenner Does Not Compute."  The first of many anti-Hal posts I wrote early in 2013 , when he was bashing us over the head with statements that insulted our intelligence.  I liked his approach this offseason, the one where he actually spent money on good players to improve the team's needs, much better than his approach to last offseason.

- "Yankees' Plans This Offseason Could Be Setting Them Up For Future Failure."  Or it could have set them up for the rude awakening they needed to realize that spending on the FA market was the best way to rebuild their team.

- "It's Still Important To Stay Grounded With Ichiro & Gardner."  I tried to tell everybody that Ichiro was going to suck this year.  I told you all and many of you didn't want to believe me.  I don't hear anybody chirping at me about dumping on Ichiro now...

- "Is Michael Pineda Ahead Of Schedule?  Should We Be Excited About That?"  No he wasn't, and no we shouldn't.  I won't write that post or anything like it before next season.  I promise.

- "Slowed Down Spring For CC Continues And It's Downright Brilliant."  Except for the part where he completely lost his feel for his fastball.  "At this stage in his career, he doesn't need to throw a lot of pitches in ST to get ready for the regular season regardless of what kind of shape his elbow is in."  One of the most incorrect sentences I wrote all year.