Where In The World Is Michael Pineda? 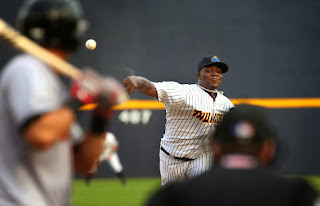 It's been 3 months since Michael Pineda was activated off the disabled list to continue rehabbing his shoulder from 2012 surgery.  It's been 2 months since he was removed from his final Triple-A start of the season with stiffness in that shoulder and shut down for the rest of the season.  Despite the team taking a very cautious approach with his rehab workload, and despite Cash saying at his year-end presser that Pineda was and is healthy, the fact remains that he was shut down for the season after throwing only 40.2 official MiL innings and has still yet to throw 1 regular season pitch as a Yankee after 2 years.

There's been little to no information on what Pineda has been doing since being shut down.  He spent the remainder of the regular season throwing side sessions at the team complex in Tampa, but there's been no talk of the next step or a plan for 2014.  Cash continues to take the cautious stance with Pineda, saying only that Pineda would "compete for a job" next spring and referencing the MiL options he still has remaining.  Knowing, at least based on Cash's word, that Pineda was healthy at the end of this season and knowing what the team's intentions were when they traded for him, that's just not good enough for me.


The Yankees can and should say what they have to say to keep expectations tempered for Pineda.  Labrum injuries are serious business and there are plenty of pitchers who've never recovered back to what they were after having the surgery.  But if they are honestly considering holding Pineda back again in the Minors next year, that's plain wrong.  At some point they need to see what they have in this kid and the only way to do that is by sticking him in the rotation.  Shoulder uncertainties being what they are, he's still probably got the highest ceiling out of all their returning non-CC pitchers and the Yankees aren't in much of a position to hold him out in place of better options.

It's easy to say the Yankees are still in the driver's seat to win this trade because of how poorly Jesus Montero and Hector Noesi have performed in the Majors.  But at least they made the Majors, at least they got into some game action.  The Yankees have nothing to show at that level from Pineda in 2 years and very little to show in the Minors because of Jose Campos' elbow problems.  I'm all for working him back slowly and managing his pitch/innings count next year, but the plan needs to be geared towards doing that in the Major League rotation.  If that's not the plan, it would at least be somewhat reassuring to know what Pineda is doing right now and what the team's plan is to get him ready for Spring Training.
Posted by Unknown at 10:22 AM