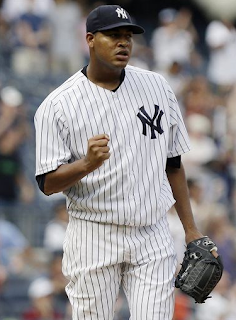 - Nova: 9 IP, 3 H, 0 R, 1 BB, 5 K.  No signs of command issues today.  Nova's 2-seamer was being located everywhere it needed to be, his curveball was unhittable, and he even mixed in a changeup or 2.  He finished the game looking better than he did when he started the game.  Awesome job of pitching.

- Jeter: 0-4, 2 GIDP, 5 LOB.  Rallies went to The Captain's spot in the batting order to die today, continuing a relatively useless string of games since coming off the DL for Jeter.  Hey, at least he hasn't re-injured himself.

The Yankees would love to sweep Baltimore, and Joe made a move in his rotation to help facilitate it.  Phil Hughes has been pushed back to Monday and it'll be the resurgent Andy Pettitte who starts the series finale tomorrow against Wei-Yin Chen.
Posted by Unknown at 5:13 PM