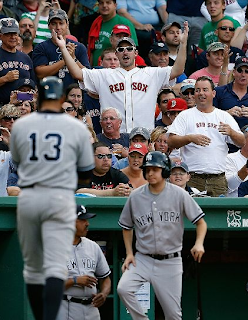 - Kuroda: 5.2 IP, 11 H, 5 R (3 ER), 0 BB, 6 K.  I called it a tough day for Kuroda and that's the best way to describe it.  He clearly wasn't at his best, the 11 hits is proof of that.  He was leaving everything just a little north of where he wanted to and Boston capitalized.  He also got burned by some bad defense behind him, bad calls by the umpires, and bad BIP luck.  It was only the 4th time this season that Hirok has allowed more than 3 R in a game, so it shows how good he's been and how high the standards are when he has a game where he gives up 3 R in 6 innings and ends up on this list.

- Robinson Cano: 0-4, 1 LOB.  He only left 1 batter on base, but Cano had a lot of chances to make an offensive impact on this game and he didn't come through.  He's been hitting well lately though, so pass it off as a bad day.

Series finale tonight and it's the ESPN Sunday Night Baseball game.  With the way they've put the negative spin on A-Rod, I expect it to be a 3-hour assault on all things Rodriguez-related.
Posted by Unknown at 7:34 PM